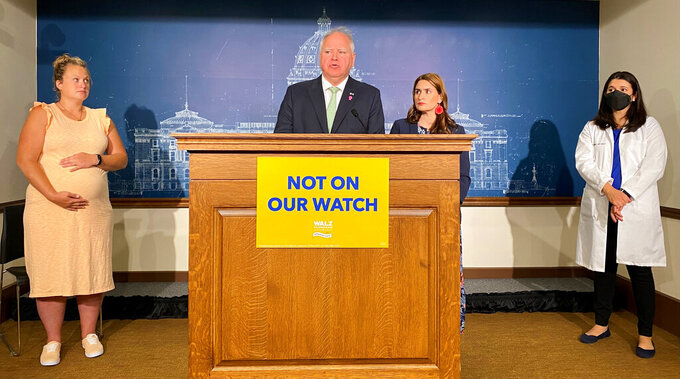 ST. PAUL, Minn. (AP) — Democratic Gov. Tim Walz's campaign on Wednesday clarified remarks he made on abortion a day earlier, acknowledging that only one Minnesota Supreme Court justice will hit the mandatory retirement age in the next gubernatorial term, not three.

Walz made the comment after telling reporters, “The governor’s office is now the last line of defense against an abortion ban in Minnesota.” Walz was contrasting his position with that of Republican challenger Scott Jensen, who has called for a ban.

But Walz campaign spokesman Darwin Forsyth said the governor misspoke, and meant to say only that he thinks three retirements are “probable” in the next term.

G. Barry Anderson is the only justice who will hit the mandatory retirement age in the next four years. Forsyth said he didn’t know if the governor expected any other specific justices to retire.

Minnesota Supreme Court justices typically time their retirements to allow governors to appoint their successors, then face the voters periodically. The only two justices on the November ballot are running unopposed.