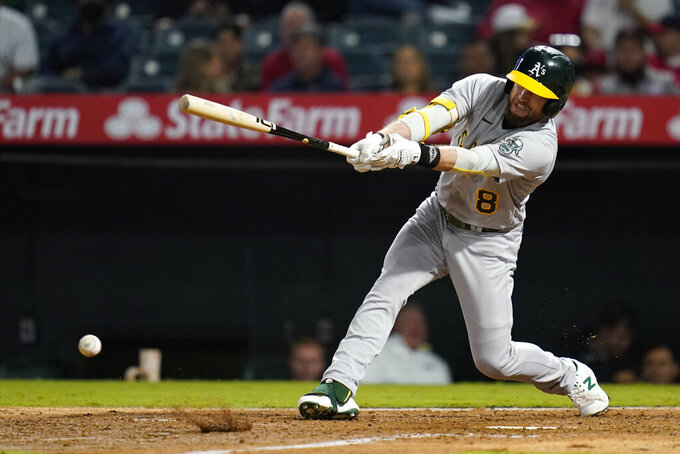 ANAHEIM, Calif. (AP) — The Oakland Athletics committed three errors in the first two innings, stranded 10 runners through the first six and didn’t have an extra-base hit all night at the Big A.

The A's still manufactured enough ugly runs and got enough beautiful pitching to keep pace in the AL wild-card race.

Cole Irvin threw six solid innings at his hometown stadium to earn his first victory in four weeks, and Oakland hung on for a 5-4 victory over the Los Angeles Angels on Friday.

Josh Harrison had two RBIs and Mark Canha scored the go-ahead run on a passed ball in the sixth for the A's (80-67), who won their third straight and remained 2 1/2 games out of the final playoff spot. Oakland kept pace with the Yankees (83-65) and gained a game on Toronto (82-65), which lost to Minnesota and dropped a half-game behind New York for the second wild card.

The A's are running out of chances to gain ground, but they were grateful to get through a rough night in Anaheim with their hopes intact.

“You have to win,” Matt Chapman said. “We can’t really dissect it too much. It’s too late in the season for that. The pressure is on now. We’ve got to win every game from here on out, or at least that’s the attitude.”

Irvin (10-13) yielded seven hits and struck out three, allowing just one earned run despite giving up his sixth homer in four starts. The native of nearby Yorba Linda graduated from Servite High School, six miles from Angel Stadium.

“As many wins as we can get right now, we’ll take,” Irvin said. “It can be ugly. It can be perfect. A win is a win, and we’re trying to do everything we can.”

Oakland's early miscues included a run-scoring error by Irvin — but the defense finally came through late, courtesy of Starling Marte.

The center fielder threw out Kean Wong for the final out of the eighth after the Angels' pinch-runner foolishly tried to go from first to third on Luis Rengifo's single.

“I’ve never seen somebody run on him yet,” said Chapman, who tagged out Wong at third. “I honestly hadn’t caught a throw from him from the outfield. He let it rip, and I was like, ’Wow.' ... He’s got a cannon. That’s why he’s got so many assists and why nobody even challenges him. Now I know why.”

Marte also made a nice running catch on Brandon Marsh's deep line drive for the second out of the ninth.

Sergio Romo pitched the ninth for his third save, and first since Sept. 2.

Kurt Suzuki homered and David Fletcher had a two-run single during a four-run second inning for the Angels, who opened their final homestand of another disappointing season with their seventh loss in 11 games.

Jhonathan Diaz didn't get out of the second inning after becoming the 12th pitcher and fourth starter to make his major league debut this season for the Angels, who have used a franchise-record 63 players in 2021. The Venezuelan left-hander only made three appearances at Triple-A, going 0-3 for Salt Lake, before getting this unlikely promotion.

Diaz, who walked four A's and hit a batter, was chased after giving up Harrison's RBI single and Matt Olson's sacrifice fly in the second.

“As soon as I threw the first pitch, the nerves went away,” Diaz said through a translator. “I reached my life goal, and now it’s time to maintain. I feel like this year has gone really well for me. I’ve advanced a lot of levels this year.”

Diaz is up because the Angels decided to push back the scheduled start of two-way superstar Shohei Ohtani, who had arm soreness. Ohtani threw a 30-pitch bullpen Friday, and the Angels announced during the game he will start Sunday against the A’s.

Angels: RHP Dylan Bundy (right shoulder strain) isn't likely to pitch again this season, manager Joe Maddon said. Bundy had an awful, injury-plagued year that will cost him many millions heading into free agency. He posted a 6.06 ERA and 1.36 WHIP after 3.29 and 1.04 marks last season.

José Suarez (7-7, 3.59 ERA) goes for his third consecutive victory in his first outing at Angel Stadium since throwing the Halos' only complete game of the season on Sept. 4. James Kaprielian (7-5, 4.02 ERA) pitches for Oakland.