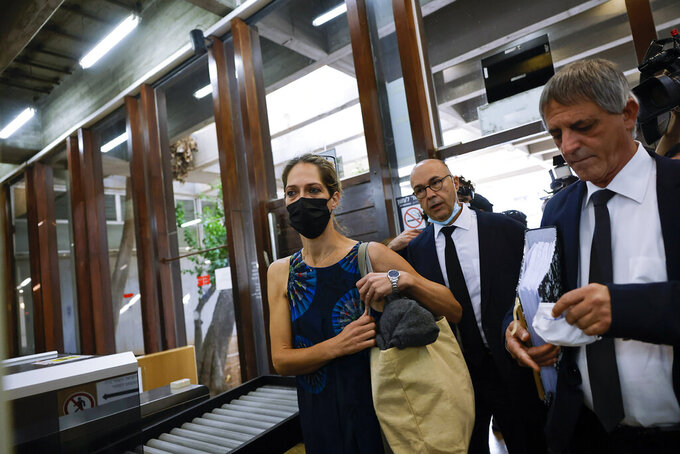 Tsafrir Abayov, ASSOCIATED PRESS
Aya Biran, center, a paternal aunt of Eitan Biran, the boy who survived a cable car crash in Italy that killed his immediate family, arrives to court in Tel Aviv Friday, Oct. 8, 2021. Biran's parents and younger sibling were among 14 killed in May when a cable car slammed into a mountainside in northern Italy. He is now the focus of a custody battle between his maternal grandparents in Israel and his paternal relatives in Italy. (AP Photo/Tsafrir Abayov)

JERUSALEM (AP) — The second hearing in a bitter custody dispute over a 6-year-old boy who survived a cable car crash in Italy that killed his immediate family ended on Friday without any final ruling, lawyers said.

Eitan Biran is the lone survivor of a mountainside cable car crash in northern Italy in May that killed 14 people, including his parents and his younger brother.

The child has been at the center of a custody battle between his maternal grandparents in Israel and paternal relatives in Italy ever since his grandfather, Shmulik Peleg, spirited him away to Israel in September. Relatives in Italy say he was taken without their knowledge while the relatives in Israel insist they are acting in his best interest and deny breaking the law.

“I lost five people of my family,” the boy's maternal grandmother, Eti Peleg, told reporters outside the courtroom. "I lost my dad, I lost my daughter, I lost my grandson. When we have Friday dinner, half of the family is not there.”

Further hearings are expected in the coming days.

Those present at Friday’s hearing were Eitan’s aunt Aya Biran, who lives in Italy and filed a formal request with the Italian court system in September seeking the boy’s return, as well as Shmulik Peleg, who has acknowledged driving him to Switzerland before flying him back to Israel.