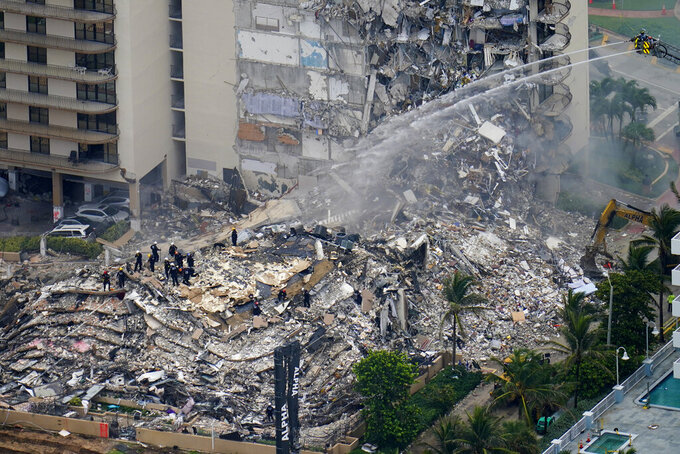 Gerald Herbert, ASSOCIATED PRESS
FILE - In this Friday, June 25, 2021, file photo, rescue workers work in the rubble at the Champlain Towers South Condo in Surfside, Fla. The fight over whether the site of June's deadly Florida condominium collapse should be sold for development or turned into a memorial boiled over during an emotional court hearing Thursday, Sept. 23, 2021, with some victims' relatives begging for time to find a buyer who won't put a new luxury high-rise there.(AP Photo/Gerald Herbert, File)

Personal property recovered from the destroyed units of a South Florida condo building that collapsed, killing 98 people, will be divided into two categories: items of soft material and hard material, according to a plan outlined before a judge overseeing litigation from the tragedy.

Only the hard items collected by Miami-Dade police officers, rescue personnel and firefighters from the rubble where the Champlain Towers South building once stood will be returned to survivors and family members of those killed, officials said in court documents.

That's because the moisture-absorbing soft items, including clothing and bedding, would cost millions of dollars to decontaminate per EPA guidelines, they said.

The exception to the rule are photos, which Miami-Dade Mayor Daniella Levine Cava has made a priority to return to survivors, Michael Goldberg, a lawyer appointed to manage the legal interests of the Champlain Towers South, said during a hearing Thursday in Miami-Dade Circuit Court.

“As the court and everyone else understands, that can be some of the most important treasures,” Goldberg said.

About $750,000 in cash was recovered from the ruins of the building in Surfside, Florida. Family members and survivors will be reimbursed somewhat quickly for cash that is easily identifiable, either because it was in a wallet or purse with an ID such as a driver's license. The actual paper bills will be transported by armored car to the U.S. Treasury in Washington, where they will be destroyed since they are contaminated. They will be replaced with checks, according to court documents.

“We are going to have claims for cash that far exceed what is coming back,” Goldberg said, noting that many bills were destroyed during the condo building's collapse. Already, some people have made claims for tens of thousands of dollars, he said.

Seventeen safes also have been recovered, and Goldberg said he expects the owners for most of them to be identified by their contents. If some aren't, family members and survivors will be given the chance to provide Goldberg with a description of their contents in order to have them returned.

For property whose owners can't be identified, the items will be photographed, numbered and uploaded to a limited-access website. Survivors and family members have a month to make claims to the items they believe belong to them. If there are competing claims, and Goldberg is unable to resolve the dispute, a hearing will be held before Miami-Dade Circuit Court Judge Michael Hanzman, who is presiding over the litigation.