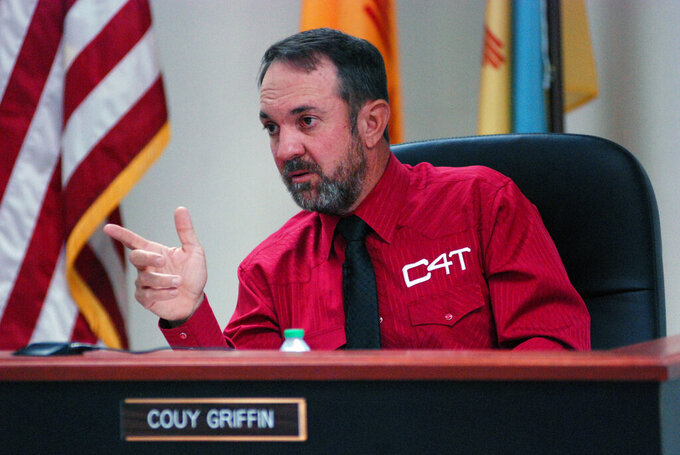 Morgan Lee, ASSOCIATED PRESS
FILE - In this May 13, 2021, file photo, Otero County Commissioner Couy Griffin presides at a public meeting in Alamogordo, N.M., in a shirt with a "C4T" logo that stands for Cowboys for Trump. Time is running out for a petition drive to recall Cowboys for Trump founder Couy Griffin from office as a county commissioner in southern New Mexico. Backers of the petition drive in Otero County say they still need to collect several hundred additional signatures by next Wednesday to trigger a special recall election against Griffin.(AP Photo/Morgan Lee, File)

SANTA FE, N.M. (AP) — Cowboys for Trump founder Couy Griffin has prevailed against efforts to recall him from office as a county commissioner in southern New Mexico.

New Mexico requires a number of signatures equal to one-third of participation in the previous election. The recall petition fell shy, with about one-quarter as time ran out on Wednesday.

“Since we didn't meet the signature threshold, there is no next step,” said Fredrick, conceding defeat Tuesday night.

A successful recall election would have allowed Democratic Gov. Michelle Lujan Grisham to select an interim replacement. Griffin can run for reelection in 2022, but told The Associated Press last week that he's more interested in running for sheriff in his native Catron County or governor of New Mexico some day.

Griffin has resumed traveled to political speaking engagements — in Texas, Montana and Arizona — while burnishing his image in a new video documentary as a God-fearing “peaceful patriot” who stands in solidarity with about 70 defendants jailed on charges related to the Jan. 6 siege on the U.S. Capitol.

Griffin formed Cowboys for Trump in 2019 with a group of rodeo acquaintances, vowing to hold horseback-riding parades nationwide in support of Trump. He is confronting misdemeanor criminal charges in the Jan. 6. insurrection on the U.S. Capitol, where he appeared on an outdoor terrace and tried to lead the crowd in prayer.

Griffin denies allegations that he knowingly entering barricaded areas of the Capitol grounds with the intent of disrupting government as Congress considered the 2020 Electoral College results, though he openly ascribes to unsubstantiated claims of fraud in the 2020 election.

In a 50-minute online documentary and political origin story released in August, Griffin recounts his own travails inside a Washington, D.C., jail for nearly three weeks after his arrest in the run-up to President Joe Biden's inauguration. Griffin says he didn't directly witness violence at the Capitol on Jan. 6 but believes it was perpetrated by militant leftists and not Trump supporters, contrary to extensive evidence.

“I myself wear Jan. 6 as a badge of honor,” Griffin says in the film, infused with orchestral tones. “I’m glad that I went on that day. ... to stand with my fellow Americans in protest of what will one day be known as the biggest rigged election in American history."

Biden’s victory was certified by officials in each of the swing states he won and by Congress on Jan. 6 — after Trump’s supporters, fueled by false allegations of widespread election fraud, stormed the House and Senate chambers in a failed attempt to prevent certification of how Americans voted nationwide.

Griffin says the film about him was put together by Trump-allied attorney Sidney Powell and her group, Defending the Republic.

Griffin also is challenging directives by state election regulators to register Cowboys for Trump as a political committee, arguing that financial disclosures would subject contributors to harassment. Griffin insists Cowboys for Trump is exempt as a for-profit group and wants a 2019 state law concerning independent political expenditure groups to be declared unconstitutional.

Powell is representing Griffin in that case, now before the U.S. 10th Circuit Court of Appeals in Denver.

A public fundraising effort to benefit Griffin is underway through the online crowdsource platform GiveSendGo that has raised at least $41,500 — including a $10,000 anonymous donation and gifts as small as $5. The fund drive highlights a photograph from the White House Oval Office of President Donald Trump posing with Griffin, who wears a shirt with the Cowboys for Trump insignia.

Griffin says the money helped him travel to Phoenix last week for a “Justice for January 6" rally.

“It’s just to help with the financial burdens of not only the legal defense, which that is part of it, but also just to survive,” Griffin said of the donations. “I make $23,000 a year (as a county commissioner) and I do a lot of traveling and I do a lot of work. ... I’m really financially strained all the time. So it’s been a blessing.”

A publicly appointed defense attorney is representing Griffin in the Jan. 6 case, and Griffin says he is represented by Powell free of charge in his lawsuit against the New Mexico secretary of state.