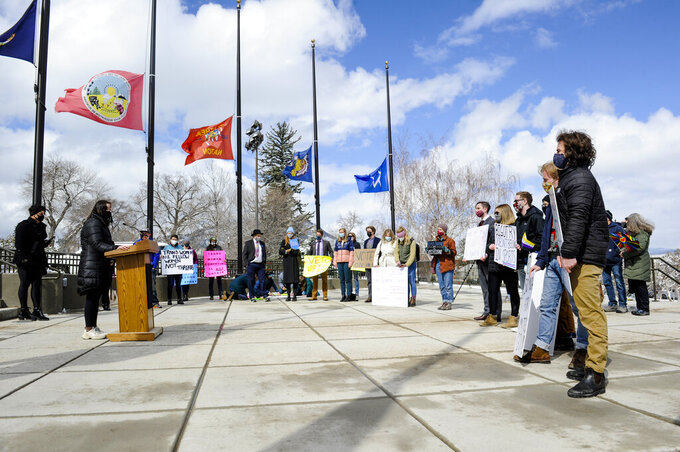 Thom Bridge, ASSOCIATED PRESS
Students, transgender people and allies from across Montana gather in front of the state Capitol in Helena, Mont., on Monday, April 19, 2021, to protest a bill that would ban transgender athletes from competing in school and college sports under the gender with which they identify. (Thom Bridge/Independent Record via AP)

HELENA, Mont. (AP) — Students, transgender people and allies from across Montana gathered Monday in front of the state Capitol to protest a bill that would ban transgender athletes from competing in school and college sports under the gender with which they identify.

Proponents of such measures — which were signed into law earlier this year by Republican governors in Arkansas, Mississippi and Tennessee — say they ensure the playing field remains fair for girls assigned as female at birth.

Opponents — including over 30 protesters who gathered Monday — say the measure unnecessarily harms transgender youth without “saving women’s sports,” as the bill purports to do.

Lucy Hochschartner, a professional biathlete who lives in Bozeman, said she had never knowingly competed with transgender athletes, but would have welcomed the experience.

“There’s no one I would rather have on my team and as a part of my family than trans athletes, because they already face so much hardship, but they can give so much and get so much from having the opportunity to participate in sports," she said.

The Montana bill has already received initial approval from the state House and Senate. Lawmakers are expected to convene Tuesday to discuss amending the bill to be nullified if the federal government withholds education funding from the state as a result of the measure.

The concern over funding loss stems from an executive order signed by President Joe Biden during his first days in office banning discrimination based on gender. Montana universities receive around $350 million annually in federal funding, of which $250 million goes towards student loans and grants to cover tuition costs — money that university officials say could be on the line.

Opponents have also raised concern over statements by the NCAA that the organization would revoke the opportunity to host championship events in states where such laws have been enacted.

Activists called Monday for Republican Gov. Greg Gianforte to veto the bill if it is passed by the Legislature. Gianforte has not commented on whether he supports the measure, or another bill also advancing this year that would ban gender-affirming surgery for transgender minors in the state.

Samuels is a corps member for the Associated Press/Report for America Statehouse News Initiative. Report for America is a nonprofit national service program that places journalists in local newsrooms to report on undercovered issues.