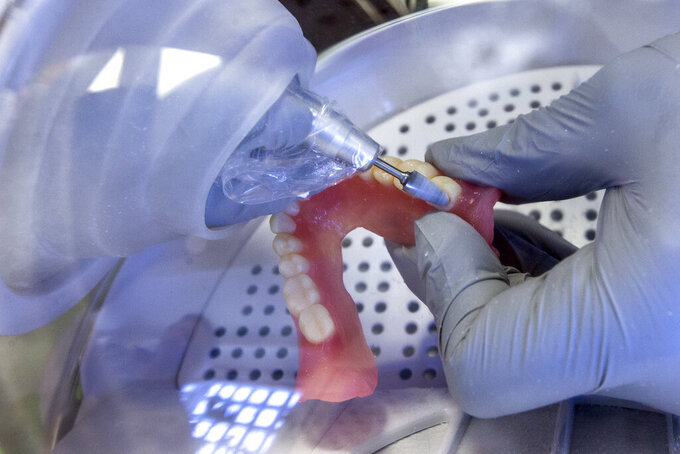 Brett Coomer, ASSOCIATED PRESS
FILE - In this June 13, 2019, file photo a dentist smooths out the edges of new 3D printed dentures in Huntsville, Texas. Dental work for Medicare recipients. An end to sky’s-the-limit pricing on prescription drugs. Coverage for low-income people locked out of Medicaid because of political battles. Those are just some of the changes to health care that Democrats want to achieve with President Joe Biden’s massive “Build Back Better” plan. (Brett Coomer/Houston Chronicle via AP, File)

WASHINGTON (AP) — Dental work for seniors on Medicare. An end to sky’s-the-limit pricing on prescription drugs. New options for long-term care at home. Coverage for low-income people locked out of Medicaid by ideological battles.

Those are just some of the changes to health care that Democrats want to achieve with President Joe Biden’s massive “Build Back Better” plan. The $3.5 trillion domestic agenda bill touches almost all aspects of American life, from taxes to climate change, but the health care components are a cornerstone for Democrats, amplified during the COVID-19 crisis.

For the nearly 145 million Americans covered by government health programs, along with their families and communities, the investment in the nation's services could make a difference in the quality of life for decades.

“It's a holistic look at how health care can be not just expanded, but better directed to the needs that people actually have,” Kathleen Sebelius, federal health secretary under President Barack Obama, said of the Biden bill. “You've got a plan that's really aimed at the serious gaps in health care that are still causing people to either go totally uninsured, or run out of money in the course of their treatments.”

But Democrats can only succeed if they bridge divisions among themselves. Don't look for Republicans to help.

With Medicare's long-term finances under a cloud, Republicans say now is not the time to add new benefits. They are planning to oppose not just the health care provisions, but the entire Biden package, voting lockstep against it as too big, costly and a slide toward “socialism.”

Mindful of the politics ahead, Democrats are assembling the package with their slim hold on Congress. Instead of launching new experiments that many progressives prefer, they have chosen to plow more resources into existing programs, from Medicare and Medicaid enacted during the Great Society to the Obama-era Affordable Care Act.

It's a compromise, of sorts, led by Biden's approach, paid for by taxes on corporations and the wealthy, those earning more than $400,000, as well as savings on prescription drug prices paid by the government to the pharmaceutical companies.

“I’ve said many times before: I believe we’re at an inflection point in this country -- one of those moments where the decisions we’re about to make can change -- literally change — the trajectory of our nation for years and possibly decades to come,” Biden said in remarks last week at the White House.

Polling has shown that core health care provisions appeal to voters across political lines. Many Republican voters, for example, generally approve of Medicare negotiating prescription drug prices, even if GOP lawmakers do not. While the Obama health law focused mainly on helping uninsured working-age people and their families, Biden's coda puts a big emphasis on older people, who also happen to be reliable midterm election voters.

Major health care provisions in the mix include:

—Authorizing Medicare to negotiate prices for the costliest drugs, including insulin. Private insurers and employer plans could then access those lower prices. Annual price increases for established drugs would be limited. Seniors’ out-of-pocket costs would be capped.

A RAND Corporation study finds such an approach could cut U.S. spending on top drugs by half.

Sharp opposition from the big pharmaceutical companies and key business industry groups have left Democrats divided over the structure of the program.

Four House Democrats opposed the measure during committee votes this past week, enough to tank the entire bill. In the past, they had supported giving Medicare authority to negotiate, but they are expressing a range of concerns about the scope of House Speaker Nancy Pelosi’s plan. The Senate could take a somewhat different approach.

Medicare negotiating authority is the linchpin of the health care package because expected savings would be used to provide new benefits.

—Expanding Medicare to cover dental care, vision, and hearing aids for seniors. This provision, championed by Sen. Bernie Sanders, I-Vt., has been a long time coming. Vision care would begin the latter part of next year and hearing aids in 2023, but in an apparent concession to costs, dental coverage would not start until 2028.

—Building on Obama health law. The idea is to provide health insurance to more than 2 million low-income people in GOP-led states that have rejected the Medicaid expansion of “Obamacare.” The workaround is a top health equity demand for Black lawmakers because many of those caught in the coverage gap are minorities in Southern states.

Biden's plan also calls for making health insurance more affordable for people who buy their own policies by extending a subsidy boost for Obama's health law. The richer subsidies are being temporarily provided in Biden's COVID-19 relief bill to people who lack employer coverage, and the White House wants to make the subsidies permanent. Lawmakers may only be able to meet the president part way.

—Promoting a shift to long-term care in the patient’s own home as opposed to nursing facilities, which turned into incubators for the coronavirus as the pandemic spread. Biden had wanted $400 billion for this initiative under Medicaid, but it looks like Congress will give him about half that.

—Permanently funding the politically popular Children's Health Insurance Program so it's not subject to recurring votes in Congress that could disrupt services.

With key centrist Democrats, including Sens. Joe Manchin of West Virginia and Kyrsten Sinema of Arizona, saying the overall $3.5 trillion price tag is too high, Democrats are looking for ways to cut costs, either by eliminating some programs or, more likely, shaving some costs or duration off what has been proposed.

Other Democrats, though, warned that a slimmer package might disappoint voters who sent them to Washington on their promises to make big changes.

“My constituents are expecting me to deliver, and I’m committed to doing it," said Rep. Lauren Underwood, D-Ill., whose professional background is in health care policy.

Biden's approval rating has taken a dive following the chaotic and violent consequences of the U.S. exit from Afghanistan and the resurgence of coronavirus at home after he proclaimed the pandemic was waning, and as Democrats in Congress look ahead to next year's midterm elections.

Democratic pollster Celinda Lake said the health care provisions in the budget bill appeal to lawmakers' own instincts for self-preservation. The proposals resonate with older voters and women, two key groups in the 2022 contests, with Democrats battling to hold on to the House.

“If you want to protect yourself in your district, you ought to double down on the health care provisions,” she said.