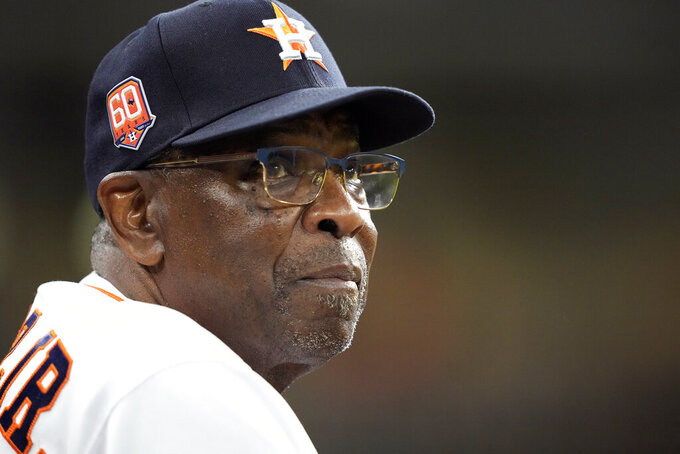 HOUSTON (AP) — Minutes after becoming the 12th manager in major league history to reach 2,000 wins, and the first Black man to do it, Dusty Baker was already looking ahead.

Asked to rank this latest accomplishment in a life already filled with so many, Baker paused for a bit before answering.

Yordan Alvarez and Jose Altuve each hit a solo homer and rookie Jeremy Peña had two RBIs to help Baker hit the milestone with Houston's 4-0 victory over the Seattle Mariners.

Ten of the 11 other managers who have accumulated at least 2,000 wins are in the Hall of Fame. Bruce Bochy (2,003), who isn’t yet eligible, is the only exception.

The 72-year-old Baker’s career record is 2,000-1,745 and he’s the only big league manager to take five different teams to the postseason.

Baker, one of two Black managers in the majors, said being the first to reach the 2,000-win benchmark makes it even more meaningful.

It’s another milestone in Baker’s storied career as a player and manager that has spanned more than 50 years. He’s reached the World Series twice as a manager, last season with the Astros and in 2002 with the San Francisco Giants. As a player, he went three times with the Dodgers, winning it all as a big-hitting left fielder in 1981.

Baker played with Hank Aaron and had relationships with many titans of the game who have died. He was asked if he thought his friends who are now gone were smiling down on him Tuesday night.

“Oh yeah, definitely, especially my dad because he was my first coach," Baker said of his father, Johnnie B. Baker Sr., who died in 2009. “My dad was tough. My dad was tough because he believed in tough love."

Cristian Javier (2-0) allowed two hits over 5 1/3 innings in his second start after opening the season in the Houston bullpen. Three relievers combined after Javier's exit to shut out the Mariners for the second straight game after getting a 3-0 win in the series opener Monday.

Seattle's J.P. Crawford went 0 for 4 with a strikeout to snap an 11-game hitting streak, which had been the longest active streak in the majors, as the Mariners lost for the sixth time in seven games.

“Our guys are grinding,” Seattle manager Scott Servais said. “They’re trying to get something going and there’s nothing we can do about today’s game. We’re going to come out tomorrow, it’s the last game on the road trip, and try to salvage something here in Houston.”

There was one out in the fourth when Alvarez connected off Chris Flexen (1-4) on a shot to center field to make it 1-0. Alvarez has homered in consecutive games and has four homers in his last five.

Flexen yielded two hits and a run while walking three in five innings. He fell to 0-5 in six career starts against the Astros.

Javier didn’t allow a hit until Ty France singled to start the fourth. But Jesse Winkler grounded into a double play before Javier retired Eugenio Suarez to end the inning.

There were two outs in the fifth when Javier plunked Abraham Toro before walking Jarred Kelenic. Javier left them both stranded by striking out Tom Murphy.

There was a runner on first with one out in the sixth when Blake Taylor took over for Javier. Taylor retired the next two batters to end the inning.

Anthony Misiewicz walked Alvarez with two outs in the sixth, ending his night. Diego Castillo came in and was greeted by a single from Yuli Gurriel before Kyle Tucker walked to load the bases.

Peña followed with a liner to left field to score two and extend the lead to 3-0.

Altuve’s shot came off Matthew Festa with one out in the seventh.

Mariners: OF Kyle Lewis homered in his first at-bat in the first game of a rehabilitation assignment with Triple-A Tacoma. Lewis, the 2020 AL Rookie of the Year, hasn’t played all season while he recovers from surgery to repair a torn meniscus. “We’ve mapped out what it looks like for the next couple of weeks for him with playing time and his ramp up,” Servais said. “We’ll get him out playing in the field on consecutive days and all that other good stuff. We’ll see how it goes.”

Astros: Houston closer Ryan Pressly, who has been out since April 14 with inflammation in his right knee, needed just six pitches to throw a perfect inning for Triple-A Sugar Land in the first game of a rehab assignment. Baker said Monday the team wasn't sure if one game in the minors would be enough for Pressly, or if he’d need multiple outings before being activated.