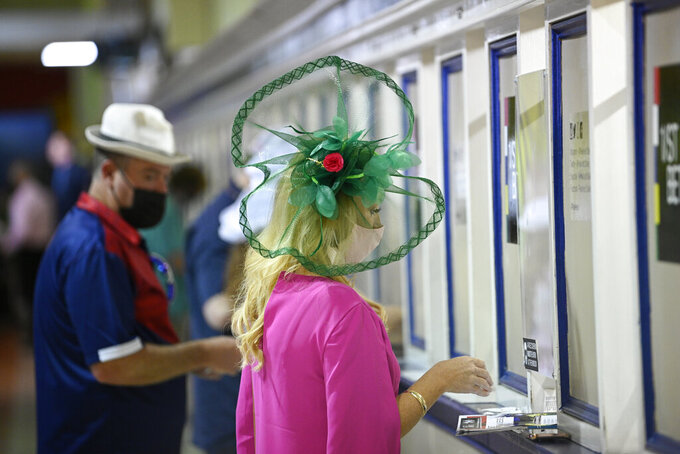 Nick Wass, ASSOCIATED PRESS
A woman wears a hat while placing a bet during the Preakness Stakes horse race at Pimlico Race Course, Saturday, May 15, 2021, in Baltimore. (AP Photo/Nick Wass)

BALTIMORE (AP) — The Latest on the Preakness (all times local):

A record $112.5 million was bet on races at Pimlico Race Course on Preakness day, shattering the previous mark of $99.8 million wagered two years ago.

The money shows an intense interest in the Preakness with Kentucky Derby winner Medina Spirit running two weeks after testing positive for a steroid. Rombauer sprung an 11-1 upset in the second leg of the Triple Crown and paid $25.60 to win. Medina Spirit finished third after going off as the 2-1 favorite.

Rombauer has given trainer Michael McCarthy his first Triple Crown victory by winning the 146th running of the Preakness as an 11-1 long shot.

Rombauer came on strong down the stretch to overtake Bob Baffert's front-running Kentucky Derby winner Medina Spirit on Saturday. Medina Spirit finished first at Churchill Downs two weeks ago but that result remains in limbo because the horse tested positive for a steroid after the race.

Midnight Bourbon came in second at Pimlico Race Course, 3 1/2 lengths back, after going off with 3-1 odds. Medina Spirit ended up third after going off as the 2-1 favorite.

The bay colt had skipped the Kentucky Derby on May 1 and was McCarthy’s first Triple Crown entrant.

The win allowed McCarthy to get a Preakness win before his mentor, Todd Pletcher, a seven-time Eclipse Award winner as trainer of the year.

Trainer Bob Baffert says Medina Spirit’s Kentucky Derby victory was “the result of the horse’s tremendous heart and nothing else” and he insists “there was never any attempt to game or cheat the system” — references to the horse’s postrace positive test for a steroid at Churchill Downs.

Baffert has two horses entered in the Preakness on Saturday but opted to stay away from Pimlico Race Course after the doping issue arose.

In a statement of more than 500 words emailed to reporters by his lawyer in the hours before the post time for the Preakness, Baffert said that “while this has been extremely hard and emotionally draining on me and my family, today is not about Bob Baffert.”

Assistant Jimmy Barnes was in Baltimore with Medina Spirit and Baffert’s other Preakness entrant, Concert Tour.

Baffert has said Medina Spirit was being treated for a skin condition with an antifungal ointment that included betamethasone, a corticosteroid that can be injected or applied topically and can help a horse’s joints.

“Our investigation is continuing and I don’t have definitive answers at this point,” Saturday’s statement said.

Welcome to a sanitized version of the Preakness. Literally.

Hand sanitizer stations are available around Pimlico Race Course, which feels empty compared to the usual crowd for the race. Capacity was capped at 10,000, and track employees are walking around instructing fans to wear a mask.

Despite the Centers for Disease Control saying Thursday that fully vaccinated people could go without a mask and Maryland dropping its mask mandate, Pimlico and the city of Baltimore have kept it in place. Adherence to that protocol was spotty at best, but the old track that has been showing its age got a fresh coat of cleaning products.

“Everything’s clean,” said Andy Lamparter, who’s attended the race most years since 1975. “The bathrooms are cleaner than they’ve ever been.”

Midnight Bourbon is the 5-2 favorite with just over three hours to go before the Preakness after Kentucky Derby winner Medina Spirit opened as the 9-5 morning line favorite. Medina Spirit is currently the 3-1 second choice and fellow Bob Baffert-trained Concert Tour next at 4-1.

Asmussen is in search of his third victory in the Preakness and first since Rachel Alexandra in 2009.

Crowded Trade is 8-1, Risk Taking, Ram, Rombauer and Keepmeinmind 12-1 and Japan-based France Go de Ina the longest shot on the board at 20-1.

The Preakness is back to its usual spot on the calendar in the middle of May but without the usual frenzy in the hours leading to the race.

Attendance is limited to 10,000 — a fraction of the typical 100,000 that packs Pimlico Race Course for the second leg of horse racing’s Triple Crown. The usually packed infield was replaced by a smaller, socially distanced gathering with musical acts that wasn’t set to open until 2 p.m.

Despite Maryland lifting its mask mandate for fully vaccinated people, Baltimore kept it in place and Pimlico maintained its protocols that require mask-wearing on the grounds.

Those in attendance saw Market Cap unseat jockey Johan Rosado in the first race Saturday in which The King Cheek won over Bob Baffert-trained favorite Hozier.

Baffert's Kentucky Derby-winning Medina Spirit was cleared Friday to run in the Preakness after undergoing three rounds of prerace testing.