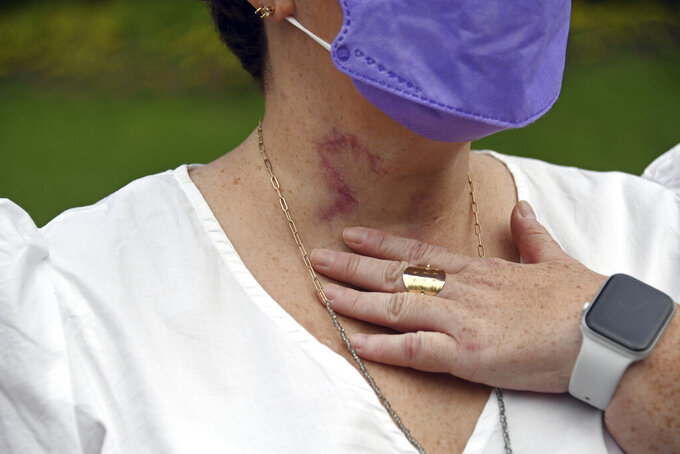 Kim Hairston, ASSOCIATED PRESS
Maria Young, of Rockville, Md. talks about the ECMO and trach scars from her treatment at Johns Hopkins Hospital for COVID-19 and double pneumonia, Thursday, Oct. 7, 2021 in Baltimore Young survived 69 days on extracorporeal membrane oxygenation, or ECMO, and 100 days intubated during her 130 day stay at Hopkins. She started Maria's Miracle, a nonprofit that advocates for critical care patients and works to train physicians in critical care procedures. (Kim Hairston/The Baltimore Sun via AP)

BALTIMORE (AP) — As Maria Young came to, she had visions of being held captive on a cruise ship. Trapped against her will, she cried out for help.

It was early February, more than three months since the health communications specialist from Rockville contracted COVID-19. She spent that time under a heavy blanket of sedation as a team of medical professionals at Johns Hopkins Hospital in Baltimore worked to save her life.

Young, 42, has no memory of those months. But the physical and emotional scars she carries from the near-death experience, and its aftermath, may never heal.

“They had multiple conversations with my parents about preparing for the end of my life,” Young said in an interview. “The trauma they lived through during that time, I’ll never understand.”

Young is one of some 540,000 Marylanders to have been infected with the coronavirus since the state health department began tallying cases in March 2020. While more than 10,000 people have died statewide, thousands more have been hospitalized and brutalized by the disease that continues to perplex medical professionals, scientists and researchers, who say much about it remains unknown.

Countless families, communities and extended networks have been ravaged by the virus. Young, for example, said her extended critical care stay forever altered her family.

“There’s a ripple effect after ICU stays,” she said. “The trauma isn’t done when the person survives.”

Young attributes her recovery to the dedicated team of health care workers who didn’t give up, even as her lungs weakened past the typical point of return. She also credits the ECMO machine, a device that oxygenated her blood outside her body to lower the demand on the heart and lungs and gave her more time.

Now, a revitalized Young hopes to offer others the same fighting chance.

Young and members of her care team describe her survival and near-full recovery as nothing short of miraculous.

Close friends dubbed it a “Miracle.”

ECMO machines — short for extracorporeal membrane oxygenation — are costly and require trained operators and staff to monitor the patient and the machine at all hours of the day.

Data from ELSO, the Extracorporeal Life Support Organization, which keeps a registry of patient outcomes on ECMO machines, shows that the global mortality rate for COVID-19 patients treated on ECMO in the past 90 days stands at about 48%. Most of the ECMO cases are logged in North America, highlighting a likely discrepancy in worldwide resource allocation and care.

So expensive and resource-heavy is the equipment that many U.S. hospitals don’t keep the machines on hand. And those that do have the equipment may not have the clinical expertise on staff, especially given the nationwide nursing shortage exacerbated by the public health crisis.

“The largest limiting factor right now in our center, our system and our nation is our shortage of nurses,” said Dr. Ali Tabatabai, associate professor of medicine at the University of Maryland School of Medicine and medical director of the Lung Rescue Unit, Adult ECMO and the Biocontainment Unit at the institution’s R Adams Cowley Shock Trauma Center. “Larger centers of excellence who have more experience and application on a routine basis should have better (ECMO) outcomes than those who do it infrequently.”

Andy Owen, a Maryland Department of Health spokesman, said the state’s hospitals had 13 ECMO machines as of Oct. 6, but the number fluctuates. It has been as high as 22, he said.

There were 325 ECMO procedures performed in Maryland during 2020 and 162 during the first two quarters of 2021, according to data from the Maryland Health Care Commission.

Dr. Errol Bush, surgical director of lung transplants and severe lung disease at Hopkins’ Comprehensive Transplant Center, oversaw Young’s care. He said the institution could “reasonably” treat about 12 patients at a time, but even then would be limiting the degree of care it could provide to other patients.

Young arrived at Hopkins last fall just as coronavirus cases, hospitalizations and deaths began to skyrocket across the country. In Maryland, COVID-19 hospitalizations reached a pandemic peak in January of more than 1,900 people.

Bush said Hopkins uses strict criteria to determine which patients are eligible for ECMO treatment. Using this framework, the hospital has had to turn potential patients away, he said.

“We’ve had to say ‘No’ before, much more than ‘Yes,’” Bush said. “We use ECMO as a last-chance therapy, after we’ve tried everything else.”

Eligibility typically depends on how long a person has been on a ventilator, another scarce medical resource, as well as how damaged a person’s lungs are already.

Of the people who do recover after ECMO, Bush said they typically start to improve after the first month. Maria spent 69 days on the machine and about 100 days intubated.

Before her diagnosis, Young did her best to stay safe from the coronavirus. She wore masks indoors, attended infrequent outdoor gatherings and worked from home, she said.

Had COVID-19 vaccines been available to her before getting sick, Young said, she would’ve been first in line to get a shot. She felt a jolt of optimism last summer and fall as businesses, shops and restaurants reopened, cases and hospitalizations fell, and clinical trials testing the vaccines in humans offered promise.

Young said she started feeling ill after a weekend spent with friends, mostly outside. On Sunday, Oct. 25, 2020, she canceled plans to visit another friend.

She spent the next few days in and out of doctors’ offices and emergency rooms as her symptoms worsened. She tested negative for COVID-19 several times and wondered whether she had a severe case of the flu.

Young said she listened to her gut, though, which told her a different story than the COVID-19 tests.

“All I remember thinking is that most people can handle this at home,” she said. “If this is the level that you can handle at home, then, holy cow, what is the level you need to go to the hospital?”

Finally, Young tested positive for COVID-19, an early case in what became last winter’s wave. Chest X-rays revealed pneumonia in both lungs. Physicians at Suburban Hospital in Bethesda transferred her to Johns Hopkins Hospital by mid-November. Within hours, she was put on ECMO.

Alone in the hospital, Young’s lungs collapsed multiple times as she slept. She endured transfusions, a blood clot and infections throughout the body, including in her eyes. Her sister wrote a eulogy.

Young wasn’t eligible for a lung transplant, doctors said, because she was too weak to survive the surgery. If she did wake up somehow, they added, she could develop neurological damage.

Young not only woke up, but also regained almost all of her bodily functions, she said while walking outside Hopkins hospital recently. It took time, though, and some days she felt like she would never get out of bed. Swallowing, breathing and speaking all had to be relearned.

When Young’s team lowered the sedation, she hallucinated, unable to separate from the darkness that had enveloped her for so long.

“It becomes this integration between the fantasy world and reality, and you have to work through it,” she said. “You have to grab onto a thread you can follow.”

Once Young got her cellphone back, she began reaching out to stunned friends and family members. She joked about the embarrassment of having an attractive male nurse help her use the restroom — proof, she said, that she not only lived but also kept her sense of humor.

But it wasn’t an easy road: She was weak, sore and woke up with a head wound and matted hair. A kind nurse cut it all off.

Young said she didn’t sleep for a stretch of six days, fearing she would never wake up. Some days she felt too tired to change the television channel.

After returning home in March, members of her inner circle and her employer reached out asking whether they could contribute to her medical bills or support her financially as she recovered. Luckily, insurance covered the costs, she said, leaving her to wonder what those without health care coverage would do after an extended critical care stay.

Even as she made gains at home, Young’s family continued to reel from the experience. And one week after Young’s release from the hospital, a cousin, Martha, died of COVID-19 in Ecuador.

In August, Young launched “Maria’s Miracle,” a nonprofit organization that aims to bring more ECMO machines and training to hospitals and connect more critical care survivors and their families with resources and financial assistance. She also is back on her feet and returned to work part time.

Young said she ultimately wants to remedy the international disparities in ECMO treatment, as well, but will focus first on the U.S., a country that boasts top-notch medical care but often fails to meet all patients’ needs.

“This flattened me, made me reevaluate my values and where I want to put my time and energy,” she said. “I wasn’t a selfish person before, but now I want to give. I want to help. I have a different motivation now.”