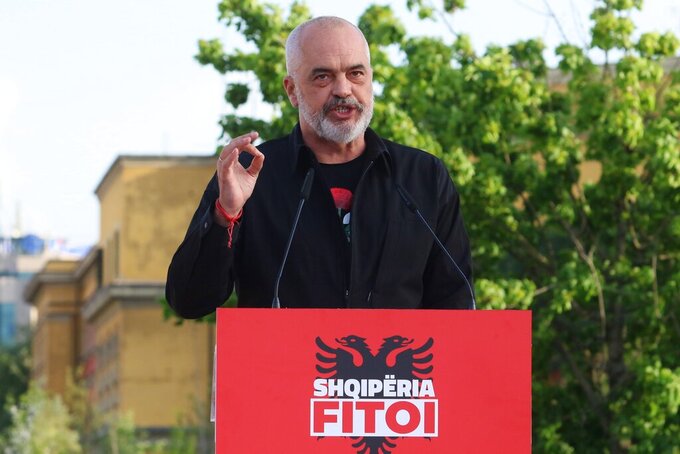 The Central Election Commission said that with 98% of the ballots from Sunday's voting counted, Prime Minister Edi Rama’s Socialists had won 49% of the vote and 74 of parliament's 140 seats. That's as many seats as they won in the previous election.

The main opposition center-right Democratic Party got 39% of the ballots and 59 seats.

“My dream ... is to make Albania in this decade ... the Balkan champion, in tourism and agro-tourism, in energy and agriculture and in fast, qualitative, incorruptible digital services,” he said.

Much of the speech was directed at the opposition Democrats, whom he urged to join the “national mega project.”

Democratic Party leader Lulzim Basha conceded defeat in a speech at his party headquarters, but also pledged to continue the fight “for democracy,” accusing the Socialists of manipulating the election process.

“I believed that due to the wonderful power of our people we would win and bring democracy back to Albania. That was not enough this time,” he said.

The Central Election Commission has said the final results will be formally announced later Tuesday. Counting will then continue for the candidates — it was the first time Albanian voters selected individual candidates in addition to political parties. It may take a week to conclude.

Voting took place relatively smoothly, though there were some problems with logistics and allegations of the photographing of ballots. The main issue was voters’ electronic identification, which was applied for the first time in the country. It didn't work in 167 of the country's 5,199 polling stations.

International observers hailed the e-voting technology but also mentioned allegations of vote buying and the death of a political supporter in a shooting before the election.

“We expect the new Albanian parliament and government to continue pursuing the country’s reform agenda with determination, particularly on the rule of law,” EU foreign policy chief Josep Borrell and EU Enlargement Commissioner Oliver Varhelyi said in a statement.

The new parliament will convene in September to elect Rama's new cabinet. Until then, ministers from his previous cabinet will retain their portfolios.

Albania, a NATO member since 2009, is hoping to launch full membership negotiations with the 27-member EU later this year.