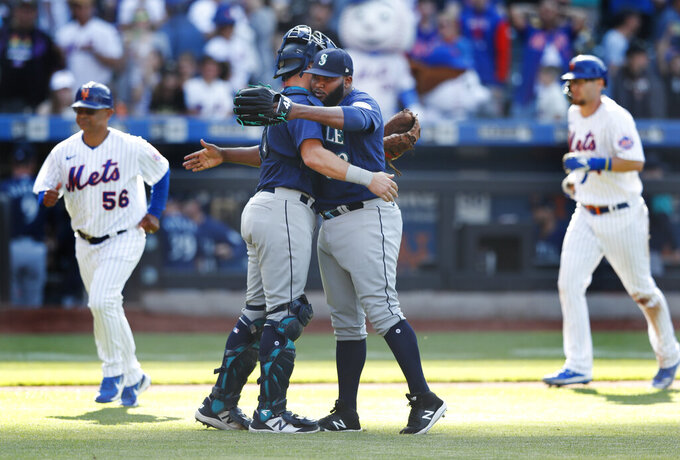 Seattle's Diego Castillo fed the NL RBIs co-leader a stream of sliders: low and outside, over the middle for a called strike, outside and then way outside as Alonso swung and missed. Another outside worked the count full, and then the next one dived to the dirt past the outside corner as Alonso tried to hold up his swing.

Hunter Wendelstedt waited two seconds as the crowd of 38,476 wondered, and then the plate umpire pointed to first with both arms. Chad Whitson raised his right hand and to signal: Out!

Mariners exhaled. The Mets and their fans groaned.

“Originally it looked like a strike, and then I saw that it wasn’t going to be,” Alonso said. “I tried to hold up. Oh, well. Got to move on.”

New York fell short and lost a series for the first time this season. With a thrilling 8-7 victory Sunday, the Mariners took two of three from the team with the National League's best record on a weekend when all three games were decided by one run.

More than a half hour later, after Castillo put on gray patent-leather Christan Lamboutin shoes for the charter flight to Toronto, adrenaline had hardly subsided.

“I'm still moving on the inside,” the 28-year-old reliever said in Spanish as teammate Sergio Romo translated.

Rookie Julio Rodríguez had his first four-hit game and Mike Ford had a two-run single in a three-run fourth for his first Mariners hit. Seattle matched a season high with 16 hits, including at least one by each starter.

Francisco Lindor homered into the left field second deck, giving him first-inning RBIs in all three games of the series, but the Mariners took a 4-1 lead in the fourth against Carlos Carrasco. In the bottom half, J.D. Davis and Brandon Nimmo became the first pair of Mets in the team’s 61-season history to hit two-run triples in the same inning.

Rodríguez tied the score in a three-run sixth when he homered off Chasen Shreve (1-1), who gave up a tying three-run homer to Jesse Winker on Saturday. Cal Raleigh, in a 2-for-33 slump, added a go-ahead, two-run drive against Drew Smith later in the inning for a 7-5 lead. Rodríguez tacked on an RBI single in the seventh.

Eduardo Escobar hit the Mets’ third triple with one out and scored on Jeff McNeil's single, Patrick Mzeika reached on an infield single and Nimmo's double drove in a run and left runners on second and third.

Castillo relieved and struck out Starling Marte on three sliders, and manager Scott Servais ordered an intentional walk to the switch-hitting Lindor.

Fans were on their feet throughout Alonso's at-bat.

“The energy was of a playoff game,” Castillo said.

He considered briefly to deviate from sliders, then changed his mind.

“If he doesn’t call him out there, I’m no longer in the game,” the manager said.

Ray struck out nine while allowing five runs in six innings. His fastball averaged 94.3 mph, well above his 92.7 mph season average and close to his velocity when he went 13-7 with an AL-best 2.84 ERA. He induced 27 swings and misses among 97 pitches.

Sewald cupped a hand to an ear and pointed to his other ear after retiring the side in the eighth. He retired all seven batters he faced in the series and spoke Friday of how fans didn't appreciate him when played for the Mets from 2017-20.

Rodríguez was doubled up at first for an inning-ending double play when he tried to steal in the second inning and continued to third, not realizing Ford had flied out to short right.

Carlos Torres joined the umpire crew at third base. Crew chief Jerry Layne was unavailable Saturday and Sunday because of a medical issue.

Mets: RHP Tylor Megill (inflamed right biceps) was placed on the 15-day IL, four days after he allowed eight runs over 1 1/3 innings during a defeat at Washington. New York selected the contract of 26-year-old RHP Colin Holderman from Triple-A Syracuse and Trevor May was transferred to the 60-day IL.