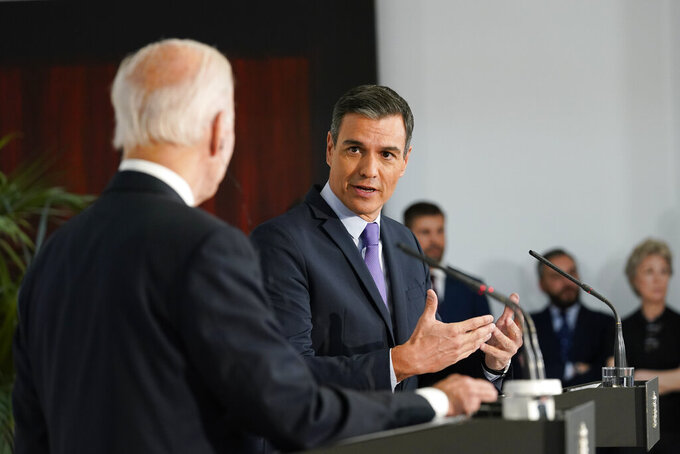 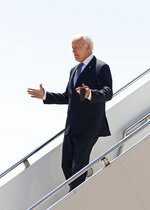 MADRID (AP) — President Joe Biden opened his three-day visit to a NATO summit Tuesday by pledging to beef up the American military presence in Europe as he denounced Russia’s Vladimir Putin for trying to “wipe out” Ukrainian culture in the ongoing war in eastern Europe.

Biden, in talks with Spanish Prime Minister Pedro Sánchez, detailed plans to increase the number of Navy destroyers based in Rota, Spain, from four to six. Biden said the move was one of multiple announcements that he and NATO allies would make during the summit to help bolster the alliance in the region.

Biden arrived in Spain for the summit amid an intense barrage of Russian fire across Ukraine— including a horrific missile attack on a shopping mall in Kyiv on Monday — and growing weariness over the grinding war that is battering the global economy.

“Sometimes I think Putin’s objective is just to literally change the entire culture -- wipe out the culture of Ukraine (with) the kinds of actions he’s taking,” Biden said after meeting with Sánchez.

“The president said before the war started that if Putin invaded Ukraine, the United States and NATO would enhance the force posture on the eastern flank, not just for the duration of the crisis, but to address the long-term change in the strategic reality that that would present,” Sullivan added.

Biden is looking to use this week's NATO summit to shore up allies amid signs of fractures in the western alliance. After heaping an avalanche of sanctions on the Russian economy and funneling billions of dollars of weaponry into Ukraine in the face of Russian aggression, NATO partners are showing signs of strain as the cost of energy and other essential goods has skyrocketed.

As the U.S. president departed for the NATO meeting from the German Alps, where he met this week with leaders of the Group of Seven leading economies, French President Emmanuel Macron said that the prices are putting European economies in an “untenable” situation. Ukrainian President Volodymyr Zelenskyy, who addressed the G-7 on Monday, has openly worried that the West has become fatigued by the cost of the war.

The U.S. and Spain, in a joint statement following the Biden-Sanchez meeting, said the invasion “fundamentally altered the global strategic environment” and that the “aggression constitutes the most direct threat to transAtlantic security and global stability since the end of the Cold War.”

Sullivan suggested that other moves Biden is set to announce will involve positioning additional forces on NATO's eastern flank “in a steady state." He declined to say if some U.S. forces that serve there on a rotational basis would become permanent.

The U.S. president praised Spain for taking in tens of thousands of Ukrainian migrants who have fled the war.

“Our people have stood together," Biden said during a meeting with Spain's King Felipe VI. “They’ve stood up and they’ve stood strong.”

Biden attended a dinner on Tuesday with other NATO leaders at the 18th Century Royal Palace of Madrid, hosted by Spain's king and queen, Letizia.

Biden is set to meet with Turkish President Erdogan on Wednesday, a day after Turkey lifted its objections to Finland and Sweden joining NATO. The two countries made the historic step of applying for NATO membership in the aftermath of the Russian invasion.

Sullivan said the U.S. did not have a role to play in negotiations between Turkey and the Nordic nations, which were being brokered by NATO Secretary-General Jens Stoltenberg.

A senior administration official said Tuesday that the U.S. offered no concessions to Turkey to coax it to accept a deal and drop its opposition to membership for Finland and Sweden.

The official said Biden told Erdogan when they spoke earlier Tuesday that closing the deal with the Nordic countries that night would set up a good opportunity for their own talks on Wednesday. The official spoke on condition of anonymity to discuss administration strategy.

Biden will also look to highlight progress made by NATO members at meeting the alliance’s goal of spending 2% of gross domestic product on their defense budgets.

Sullivan said a majority of members would report that they have met the benchmark or are on track to by 2024. He described it as a “substantial shift in the intensity and commitment of NATO allies in terms of putting their money where their mouth is.” Biden's predecessor, Republican Donald Trump, fiercely criticized NATO partners who failed to hit the target.

U.S. and South Korean officials say that North Korea has all but finished preparations for its first nuclear test since September 2017, when it claimed to have detonated a thermonuclear warhead designed for intercontinental ballistic missiles.

North Korea may use its next nuclear test to claim that it has acquired the ability to build small nuclear warheads that can be placed on short-range missiles or other new weapons systems it has demonstrated in recent months, analysts say.