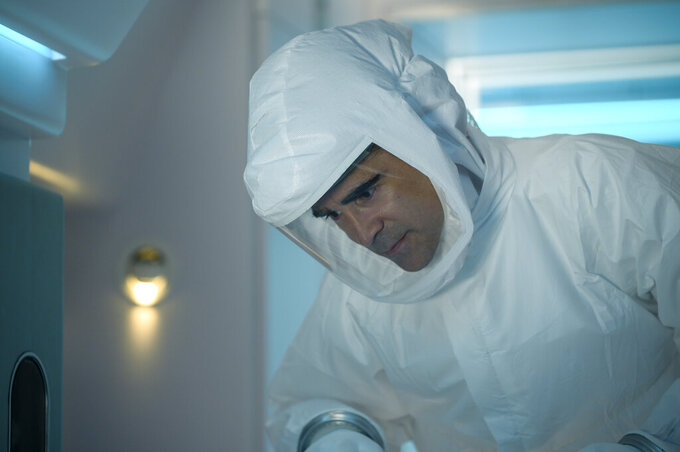 The most surprising thing about “ Voyagers,” a sci-fi thriller about a group of young adults who have been tasked with travelling to and repopulating a new planet, is that it isn’t based on a Young Adult book series. Writer and director Neil Burger, who was also behind the “Divergent” films apparently decided to cut out the Intellectual Property middleman and make his own YA statement. That said, it does borrow heavily from quite a few other sources, with shades of “Lord of the Flies,” “The Giver,” “Ender’s Game,” “Euphoria” and any number of space madness films.

With a cast including Lily-Rose Depp, Tye Sheridan, Fionn Whitehead, Chante Adams, Archie Madekwe and Quintessa Swindell, nice-looking production design and a fast-moving plot, it’s a very watchable film. It also unfortunately suffers from the same problems as some of its IP-brethren —- it is dreadfully serious, fails to make the audience care very much about anyone involved and feels like it’s the first book in a series when all is said and done.

Set in the near future, “Voyagers” dumps vague information about earth’s deteriorating condition and a plan to send a group of people to another planet to start life anew. Since the journey is 86-years-long, it’ll be the grandchildren of the initial explorers. So they genetically engineer a group of racially diverse, suspiciously attractive geniuses for this first generation and shoot them off into space as young kids with only Colin Farrell’s Richard there to raise and monitor and counsel them. What could possibly go wrong with this terribly hasty plan?

Well, it certainly doesn’t help that a few years into the journey Whitehead’s Zac and Sheridan’s Christopher discover that they’re all being drugged to suppress their hormones and keep everyone semi-robotically focused on the mission instead shacking up with their crewmates. When they decide to stop taking the blue drink that it’s been hidden in, Zac turns immediately into a feral sex predator with an obsessive focus on Depp’s Sela. Soon enough everyone stops taking “the blue” and after Richard is hurt in an accident and there’s no supervision anymore, the ship devolves into a chaotic jumble of raging hormones, power struggles and paranoia and “The Lord of the Flies” parallels really start to take over. There’s even a Piggy-like character and a moment where a riled-up faction of the crew starts chanting “Kill!” Oh, the crew also starts to wonder whether there’s an alien aboard, as if there wasn’t already enough to chew on.

“Voyagers” has lofty ambitions and big, cliched questions about purpose, but one of the main problems is that it doesn’t do a great job of establishing its own characters. Part of that is likely due to “the blue” which makes everyone docile and emotion-free, but even after they stop taking it, the few characters who get personalities are painted with such broad strokes that there’s nothing to hold onto. Only Zac gets a real transformation, but there’s also no nuance to him. He’s a bad guy and a potential rapist with no discernable charisma, and it’s totally unclear why any portion of the crew would choose to follow him instead of the level-headed Christopher. Also, while the crew is quite racially diverse, 95% of the film is still laser focused on four white leads.

It’s the kind of premise that you can imagine would have been better served by a limited series with time to get to know and like at least some of the characters so that there are some stakes. We should be upset by Zac’s villainous devolution and torn by who might be the better leader. We should know more than three of the character’s names and care when people start dying. “Voyagers” is simply a semi-effective thriller with about as much emotional intelligence as its lab-produced, hormone-controlled, sequestered youngsters.

“Voyagers,” a Lionsgate release in theaters Friday, has been rated PG-13 by the Motion Picture Association of America for “violence, some strong sexuality, bloody images, a sexual assault and brief strong language.” Running time: 108 minutes. Two stars out of four.