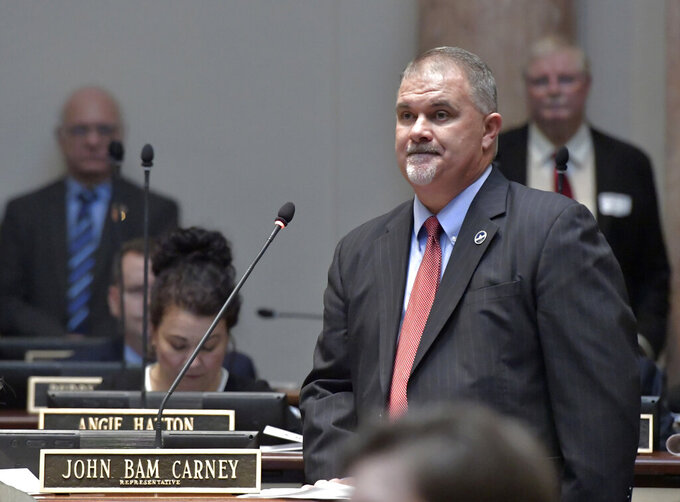 Timothy D. Easley, ASSOCIATED PRESS
FILE - In this Jan. 8, 2019 file photo, Kentucky House Majority Leader John Bam Carney R-Campbellsville, addresses the members during the opening day of the legislature in Frankfort, Ky. Carney died Saturday, July 17, 2021 after battling an illness since late 2019. He was 51. According to a family statement posted by Mark Carney on Facebook, that John Carney “passed peacefully” at the University of Kentucky medical center. (AP Photo/Timothy D. Easley, File)

According to a family statement posted by Mark Carney on Facebook, that John Carney “passed peacefully” at the University of Kentucky medical center.

“Thanks be to God for the life that Bam lived — and for all that he has gained today,” his family wrote.

Carney was a Republican from Taylor County and had served in the Kentucky House of Representatives since 2009.

In late 2019, Carney began receiving treatment for a severe case of pancreatitis and infection. Pancreatitis is an inflammation of the pancreas. He spent more than a 100 days in the hospital in 2020.

“Throughout his tenure, Bam took on tough issues and fought for Kentucky’s most vulnerable students, using his expertise as an educator and coach to change the Commonwealth for the better,” said Senate Republican leader Mitch McConnell in a statement. "During his long illness, he continued to serve in a different way by becoming an inspiration to others who face hardships."

House Speaker David Osborne, on behalf of the Republican caucus, said their hearts were “broken” over Carney's death.

"As House education chair and House majority floor leader, he worked diligently to provide a voice for children in classrooms across our state," Osborne said in a statement. “His collaborative approach led to the passage of the School Safety and Resiliency Act, bringing focus to both strengthening physical safety and our approach to childhood mental health issues.”

“He was an outstanding public servant who truly believed that, whatever our differences, we are united as Kentuckians,” Graham and Hatton said in a statement.