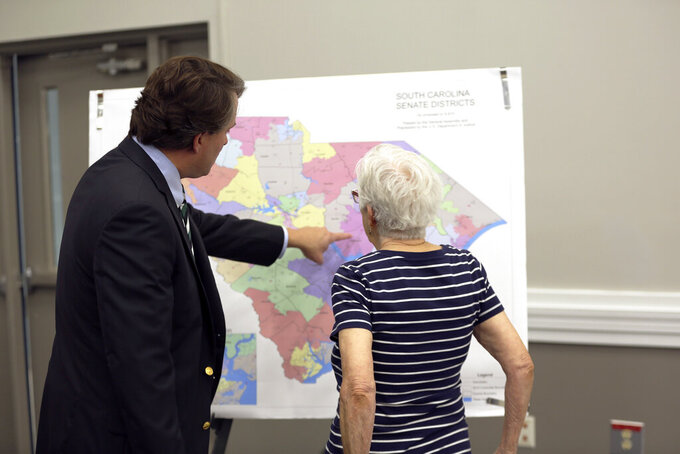 COLUMBIA, S.C. (AP) — Leading South Carolina Republican lawmakers are dismissing allegations they are taking too long to draw new congressional and legislative districts, arguing that legal action should be held off until new lines are actually drawn.

The response came in a filing this week by attorneys for state House Speaker Jay Lucas and the chairmen of two House committees presiding over the process. It's part of a lawsuit filed recently by two civil rights groups against Gov. Henry McMaster, state election officials and leading lawmakers over the yet-to-be-redrawn district boundaries.

Candidates are required to file to run for the 2022 races by the end of March, but the National Association for the Advancement of Colored People and the American Civil Liberties Union allege time is running out for potential candidates to research the new districts and settle any lawsuits.

In their suit, the groups asked that a three-judge panel set a specific timeline for maps to be drawn and approved, and not allow any elections until the new districts get judicial approval. That specific proposal, attorneys for the Republican lawmakers wrote in papers filed Tuesday, represents an “unwarranted invitation to burden and infringe on the important legislative task of redistricting," noting decades-old legal precedent denying such requests.

The overall case, legislators' attorneys wrote, “is nothing more than a thinly veiled invitation ... for the federal judiciary to actively participate in a state legislative process reserved for the South Carolina General Assembly.”

Ahead of the lawsuit, legislative attorneys noted, House Judiciary Committee Chairman Chris Murphy fielded “lengthy, aggressive demands” from the state NAACP pertaining to the redistricting process. He noted in his replies that “the historical timing of redistricting activities has been delayed substantially by factors well beyond the control of anyone in the House — namely, the belated release of final population data by the U.S. Census Bureau.”

This year, that data release was delayed until August, partly owing to complications arising from the COVID-19 pandemic. In 2010, lawmakers received that information about five months earlier in the cycle.

South Carolina candidates' two-week filing period for the 2022 races opens March 16, which is just nine weeks after the next time lawmakers are required to meet, at the opening of the 2022 General Assembly session. Party primaries are in June.

The maps drawn by South Carolina lawmakers have been challenged in court each decade since 1970 and faced a long and significant challenge in each cycle except 2010. In 1992, a judge required the state to delay filing until June and primaries until August after lawmakers failed to approve new maps from the 1990 Census.

This year’s suit was filed on behalf of Taiwan Scott, a Black man whose family has lived on Hilton Head Island for seven generations. In court papers, he said that he and other voters deserve time to publicly comment on the proposed maps and study them at length before deciding whether to run for office or encourage certain people to run.

Lawmakers are still taking public testimony. At a meeting Thursday, speakers said they were presenting maps to give senators examples of how they could fairly create new districts that abide by general redistricting principles, like keeping districts contiguous and keeping cities, counties and other communities of interest together.

Somil Trivedi, an ACLU attorney, said the map presented by his organization and the NAACP’s Legal Defense Fund shows that lawmakers can account for the state's population shifts while ensuring Black voters are equally represented.

“If you look at a map proposal, and then you don’t find districts that appall and offend you, you haven’t looked far enough, because no one is ever happy with any map proposal,” said John Ruoff, who drew a map for the League of Women Voters. “These are suggestions. We’re not telling you that somehow this is the perfect map.”

The subcommittee set a Nov. 1 deadline for public submission of proposed congressional plans.

Michelle Liu contributed to this report.

Meg Kinnard can be reached on Twitter at http://twitter.com/MegKinnardAP.