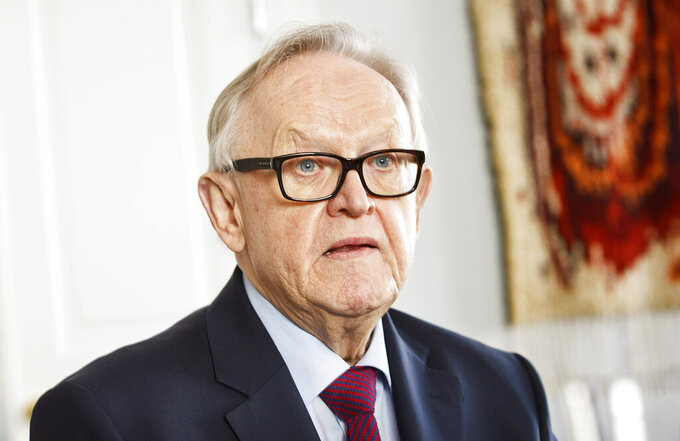 Roni Rekomaa, ASSOCIATED PRESS
FILE - In this file photo dated Feb. 16, 2016, former President of Finland Martti Ahtisaari at luncheon for political journalists in Helsinki, Finland. Former Finnish President and Nobel Peace Prize winner Martti Ahtisaari is suffering from Alzheimer’s disease and has withdrawn from all public activities. The office of the Finnish President Sauli Niinisto said Thursday, Sept. 2, 2021 that the 84-year-old Ahtisaari “is receiving support for everyday life at home and occasionally spends periods of treatment in a care facility” due to the advanced state of the disease. (Roni Rekomaa/Lehtikuvaa via AP, File)

The office of the Finnish President Sauli Niinisto said on Thursday that the 84-year-old Ahtisaari, the Nordic country’s head of state 1994-2000, “is receiving support for everyday life at home and occasionally spends periods of treatment in a care facility” because of the advanced state of the disease.

A primary school teacher-turned diplomat, Ahtisaari worked for decades as a diplomat and a peace broker for the Finnish government and the United Nations, and won a Nobel Peace Prize in 2008 for his work to resolve international conflicts.

Among other conflicts, Ahtisaari helped reaching peace accords in Serbia’s withdrawal from Kosovo, Namibia’s strive for independence and autonomy for the Aceh special district in Indonesia.

After his Finnish presidency ended in 2000, Ahtisaari founded the Helsinki-based Crisis Management Initiative, or CMI, aimed at preventing and resolving violent conflicts through informal dialogue and mediation, which tweeted the news of Ahtisaari's disease.

He stepped down as a chairman of the CMI, a nongovernmental organization, in late 2017 and has been in retirement since.