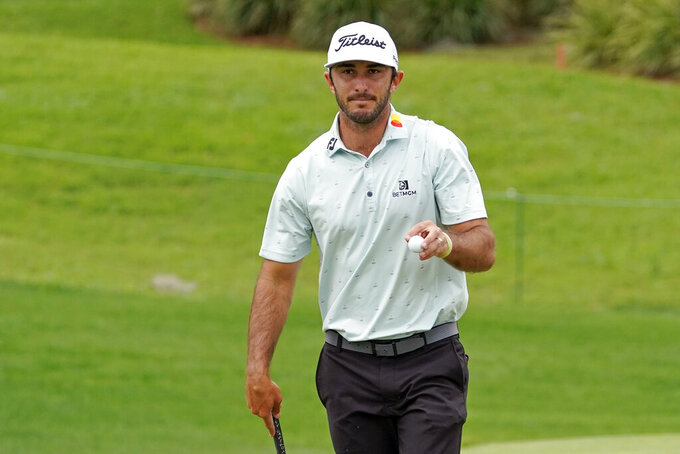 John Raoux, ASSOCIATED PRESS
FILE - Max Homa holds up his ball to the gallery after sinking a birdie putt on the second green during the third round of the Arnold Palmer Invitational golf tournament on March 6, 2021, in Orlando, Fla. If Homa still had a podcast, he would tell his listeners that everything is fine, thanks for asking. Homa, the son of a Hollywood acting coach and a three-time winner on the PGA Tour, has strong instincts about fan engagement. He built a big following on social media and then began mercilessly dissecting his own play on the “Get a Grip” podcast with Golf Channel host Shane Bacon. (AP Photo/John Raoux, File)

POTOMAC, Md. (AP) — If Max Homa still had a podcast, he would tell his listeners that everything is fine, thanks for asking.

Homa, the son of a Hollywood acting coach and a three-time winner on the PGA Tour, has strong instincts about fan engagement. He built a big following on social media and then began mercilessly dissecting his own play on the “Get a Grip” podcast with Golf Channel host Shane Bacon.

It was a riveting listen for golf obsessives who appreciated the honesty of a tour player describing what he was thinking and feeling on every shot — and detailing the many areas in which his game fell short.

Until last fall, when Homa cut the microphone cord. He decided that dwelling on the negatives of every round — a mental exercise his fellow tour pros, acting on the advice of sports psychologists, try their best to avoid — was holding him back.

Speaking after a practice putting session on Wednesday at the Wells Fargo Championship, Homa had no regrets.

“So far, so good, I guess, results-wise,” Homa said. “I’ve played quite well. I feel like I’m in a good mental spot. I haven’t played this good of golf for a sustained time before, so there’s no tangible evidence to say that it’s right, but there’s a little bit, I guess. I miss talking to Shane every week, but it’s been nice not having to rehash bad golf shots I hit.”

Homa won his first start after the podcast ended in September, the Fortinet Championship in Napa, California. He finished 17th or better in five of his first six events this year, and he made the cut at the Masters for the first time in three tries.

The consistency has been welcome after an up-and-down 2021. Following his breakthrough win in his hometown event at Riviera, he had a legitimate shot at making the Ryder Cup team. But a stretch of six missed cuts in nine events and middling results in the FedEx Cup playoffs resulted in his season ending before the Tour Championship.

Through it all, the podcast never felt like a chore. It was only after he spoke to Bacon that he realized how draining it was.

“I didn't really, like, stray away from trying to be honest. It was more like I went in to be normal and just talk, like I would talk to my wife or (caddie) Joe (Greiner) or somebody,” Homa said. “I didn't dread it at all. It was just, after I was done, I realized it was causing a little bit of a funk, like, I'm not really helping myself.”

He has had no trouble spending that extra hour a week practicing, working out or spending time with his wife and dog.

The 31-year-old Homa got his first win at the Wells Fargo in 2019 at Quail Hollow in Charlotte, North Carolina. This year's event is being played at TPC Potomac at Avenel Farm because Quail Hollow is hosting the Presidents Cup in September. Homa may not be the main draw for fans in the golf-starved Washington area, but his popularity belies his career-best ranking of 31st in the world.

“I fortunately still get a decent amount of engagement from people,” Homa said. “I wish there were podcasts where people that play sport were super honest and could fill people in on the nuances of their, whether it's a tournament or a game or whatever, but at a point I was not up for that anymore. I didn't feel like it was doing me a ton of good.”