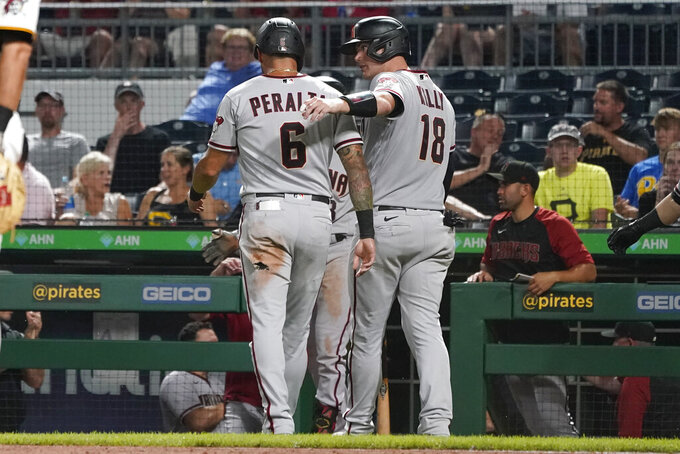 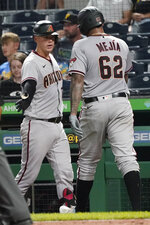 PITTSBURGH (AP) — Yoshi Tsutsugo homered and Bryan Reynolds tripled in the seventh to help the Pittsburgh Pirates rally to beat the Arizona Diamondbacks 6-5 on Monday night.

With the game tied in the eighth, Noé Ramirez (0-1) walked three straight to load the bases before Jake Faria came in to face Ke’Bryan Hayes with one out. Hayes sent a dribbler to short on the 10th pitch of the at-bat, scoring Kevin Newman.

“I'm sure he wasn't trying to give me anything middle of the played,” said Hayes, who took three consecutive balls to start the at-bat. “So, I'm sure early in the count, he was trying to make his best pitch, which was probably a heater. He had a little bit of cut, so trying to get me to roll over for a groundball double play. I wasn't trying to do too much. Trying to see something, hit it.”

Tsutsugo started Pittsburgh’s seventh-inning rally with his second pinch-hit home run of the season, sending a solo shot into the front row above the right-field wall. Three of his six hits since signing with the Pirates on Aug. 16 have been homers.

“He's impacted the baseball with really good swings,” Pirates manager Derek Shelton said. “When we acquired him, we knew there was power in there. We've seen it in the short-term.”

Reynolds drove in Hayes with a triple to right-center on a sinker from Joe Mantiply, pulling Pittsburgh within one. Reynolds scored on an error from third baseman Asdrúbal Cabrera to tie it.

“The backend of our bullpen needs to be better,” Diamondbacks manager Torey Lovullo said. “They're going to be the first group to tell you that. They're extremely accountable. We just didn't get the job done on that backside. We have to find a way to improve.”

Pirates reliever Anthony Banda (2-0) struck out the side in the eighth. David Bednar retired the side in order in the ninth for his second major league save.

Pittsburgh has won three of four after dropping 13 of its previous 14 to move 3 1/2 games ahead of the National League-worst Diamondbacks.

Christian Walker gave Arizona a 5-1 lead with a three-run double that chased Pirates starter Wil Crowe with two outs in the fifth. A single from Ketel Marte put Arizona ahead 2-1 earlier in the inning after starting pitcher Humberto Mejía led off the inning with a double, his first hit in the majors.

“I felt like I had my best command, feel for all my pitches tonight,” Crowe said. “When I felt that way, that's why I was getting a little frustrated 0-0 after I would throw a non-competitive ball. ... I felt so good tonight. We've been working really hard on competitive strikes with the curveball, with the slider, with the changeup.”

Mejía gave up two runs on six hits in five innings after being recalled from Triple-A Reno to make his Arizona debut.

“I felt very positive with the way things went today,” Mejía said. “I was accumulating a lot of strikes. The only negative, the downside, was that I found myself in a lot of 3-2 counts, full counts. That's something I need to work on. But positive throughout the whole outing.”

Daulton Varsho homered in a third straight game to put the Diamondbacks ahead 1-0 in the second.

Pirates: INF Michael Chavis was recalled from Triple-A Indianapolis to make his Pittsburgh debut at second base. He was acquired from the Red Sox on July 30 in a trade that sent LHP Austin Davis to Boston.

Pirates: OF Anthony Alford (back) was reinstated from the 10-day injured list.

Diamondbacks: OF Kole Calhoun will begin an outdoor running progression this week, Lovullo said. He was placed on the 10-day IL with a left hamstring strain Aug. 12. … Mantiply was reinstated from the COVID-19 injured list Monday.

LHP Madison Bumgarner (7-7, 4.06) will take the mound for the Diamondbacks against Pirates RHP JT Brubaker (4-13, 5.49) on Tuesday in the second game of the three-game series. Bumgarner is coming off his longest outing of the season, allowing one run in eight innings against the Philadelphia Phillies on Aug. 19. Brubaker is 0-9 in 12 starts since last winning May 29. He gave up seven runs to the Dodgers in four innings on Aug. 18.