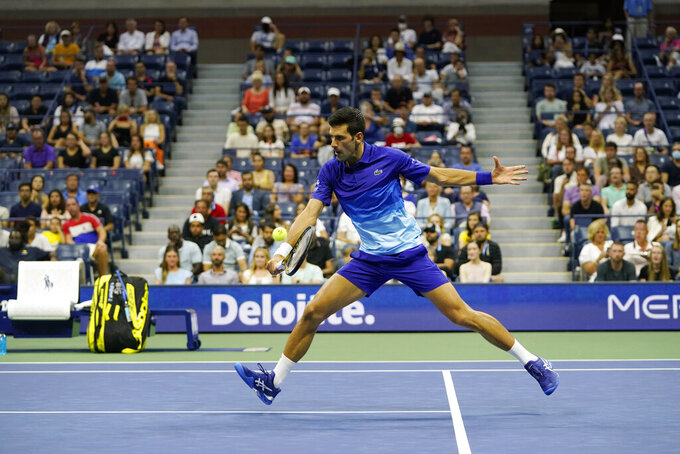 Novak Djokovic has had some memorable matches at the U.S. Open against Roger Federer. Now he plays Federer's replacement. The top-ranked Djokovic's second-round match is against Tallon Griekspoor, who was moved into the main draw when Federer had to withdraw because of a knee injury. Djokovic is tied with Federer and Rafael Nadal with 20 major championships. He is trying to become the first man to win all four Grand Slam tournaments in the same year since 1969. He had a bit of a bumpy start, losing the second set against qualifier Holger Vitus Nodskov Rune in the first round before easily taking the final two. Women's No. 1 seed Ash Barty and men's Olympic gold medalist Alexander Zverev play daytime matches on Arthur Ashe Stadium, where they were victorious Tuesday. The schedule grew fuller late Wednesday afternoon when heavy rains caused a number of matches to be suspended until Thursday.

18 -- Age of Carlos Alcaraz, making him the youngest player to reach the third round at two Grand Slam tournaments (French Open, U.S. Open) since Novak Djokovic in 2005 (Wimbledon, U.S. Open).

“That’s what I want. I want him bad. ... I’m coming after him.” — Frances Tiafoe, after the American set up a match against No. 5 seed Andrey Rublev in the third round. Tiafoe beat Rublev in the U.S. Open boys’ quarterfinals in 2014.