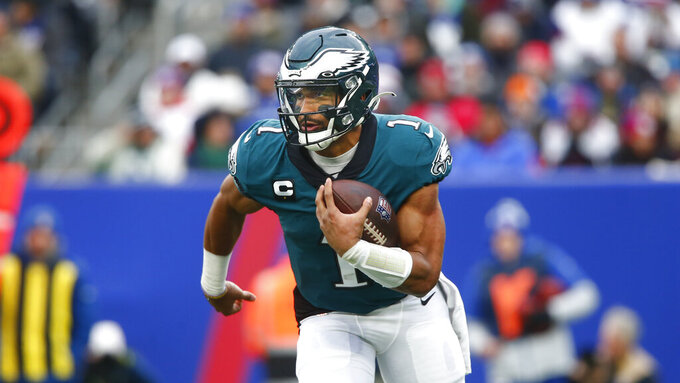 PHILADELPHIA (AP) — Jalen Hurts had no energy Wednesday for any drama regarding his playing status for Sunday when the Philadelphia Eagles visit the New York Jets.

“You guys know I’m dealing with something,” Hurts said about his ankle sprain. “It’s the first one you guys have known. I’m going to continue to deal with it, and go on and get ready for the next game.”

The second-year quarterback is coming off his worst game as a pro. He threw three interceptions in a 13-7 loss to the Giants. The Eagles (5-7) had won two in a row.

Before Hurts spoke to reporters, coach Nick Sirianni said the Eagles were “hopeful” he would play. Sirianni said Hurts would take reps in the afternoon walkthrough practice. Officially, he was listed as a limited participant.

“He’s as tough as they get,” Sirianni said. “Obviously, you want that out of your quarterback. So, yeah, I mean, in my mind, he’s playing, right? Again, like I said, we’re hopeful. I think in his and my mind, we’re both saying, ‘Yeah, he’s going.'”

Philadelphia’s backup is Gardner Minshew, acquired in a trade with Jacksonville just before the start of the season. Minshew was No. 3 on the depth chart until the Eagles traded Joe Flacco back to the Jets on Oct. 25. Minshew took 14 snaps at the end of a blowout win at Detroit on Oct. 31.

“Every week you have a contingency. ... You tweak everything for each individual player,” Sirianni said, in discussing how preparing for this game might include the possibility of Minshew taking some snaps.

Hurts’ sprained ankle is a bigger deal than it might be for some quarterbacks because mobility is integral to his game. He is the leading rusher for the Eagles with 695 yards on 122 carries (5.7 yards per carry). Hurts has rushed for at least 50 yards in the Eagles’ past six games, making him the franchise’s first QB to do that since Randall Cunningham in 1990.

Sirianni said he feels Hurts can be effective even if his ankle isn’t 100 percent.

“I’ve seen him do that throughout the year ... in different spurts, maybe being tired or after taking a hit, or whatever it is,” Sirianni said. “So, yeah, I’m confident in that.”

Hurts said this isn’t the first time he has been dinged.

The Giants made a point of hitting Hurts hard after handoffs on run/pass option plays. Asked about how he can defend himself, Hurts said he might have to emulate the quarterback in the movie “Remember the Titans,” who asked one of his linemen to let a rusher through, then ducked and flipped the player over his back.

Hurts completed 14 of 31 passes for 129 yards, no touchdowns and a 17.5 passer rating against the Giants.

“I have so much I learned from the game. Being patient, and playing my position … going out there and taking care of the ball,” said Hurts, who was intercepted only five times in the season’s first 11 games. “That’s something I’ve done a fairly good job of ... to this point.”

Hurts stressed the importance of “attention to detail,” adding that “it’s something we lacked as an offense, something I lacked in last week’s game.”

Eagles running back Boston Scott lost a fumble in Giants territory with 1:34 remaining and wideout Jalen Reagor couldn’t handle a pair of potential touchdown passes in the last minute.

NOTES: Eagles center Jason Kelce is expected to make his 118th consecutive start Sunday despite the knee injury he suffered against the Giants. Kelce returned to that game after getting his knee stabilized on the sideline, prompting Sirianni to text him after the game. “You’re the toughest guy I know. We appreciate the heck out of you coming back in,” Sirianni said of his message to Kelce. Sirianni added Wednesday: “It was just awesome. ... He’s so tough, and our team feeds off that.” ... RB Jordan Howard (knee) did not practice and RB Miles Sanders (ankle) was listed as limited.