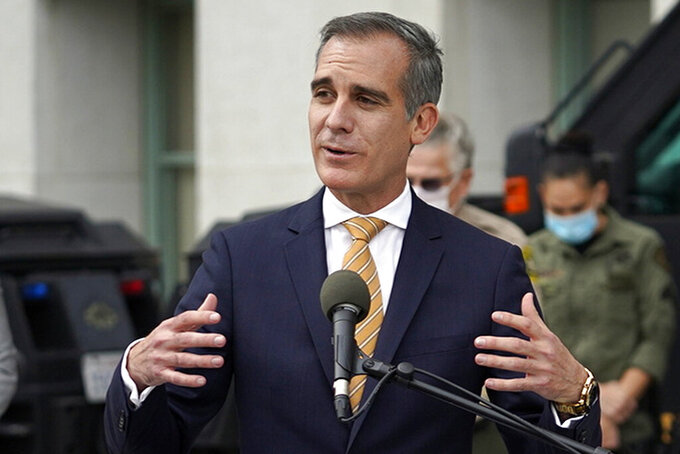 Damian Dovarganes, ASSOCIATED PRESS
FILE - Los Angeles Mayor Eric Garcetti speaks at news conference outside the Hall of Justice in Los Angeles, on Jan. 19, 2021. Garcetti, who just returned from quarantine overseas after developing COVID-19 in Scotland, warned Wednesday, Nov. 17, 2021, that a coronavirus surge was likely during the upcoming holiday season and urged residents to get vaccinated to keep case numbers and hospitalizations down. (AP Photo/Damian Dovarganes, File)

LOS ANGELES (AP) — Mayor Eric Garcetti, who just returned from quarantine overseas after developing COVID-19 in Scotland, warned Wednesday that a coronavirus surge was likely during the upcoming holiday season and urged residents to get vaccinated to keep case numbers and hospitalizations down.

“The answer to who should get the vaccine is simple: everyone,” Garcetti said. “If you have family members who are coming for Thanksgiving or Christmas or the holidays, get them vaccinated.”

Garcetti noted that vaccination protection diminishes over time and used himself as an example of a breakthrough infection. The mayor said he had put off getting a booster shot and came down with COVID-19 while attending a United Nations climate conference in the United Kingdom.

He had a mild fever for a day, flu-like symptoms and lost his taste and smell for a few days “but then was fully recovered, probably thanks to the vaccine that I got earlier this year,” Garcetti said.

“The United Kingdom is experiencing a surge. They’ve often been ahead of our surges, and we can expect this to hit us here in the coming weeks and months,” he said during an evening briefing.

Los Angeles County case numbers, hospitalizations and deaths are much better than during a surge in July, the last time Garcetti gave a COVID-19 briefing. But he warned that colder temperatures and more time spent indoors raises the risk of spreading the infection.

The city has ample vaccine supplies for residents and for visitors, he said.

Garcetti reported a high rate of compliance by customers required under new rules to show proof of vaccination at a wide variety of businesses in the city. The SafePass LA mandate to guard against renewed virus spread went into effect last week for restaurants, theaters, gyms and salons.

It was about this time of year in 2020 when the worst spike of the pandemic was just beginning in California. By January, the state averaged 500 deaths per day. Los Angeles County became the state’s epicenter, with overloaded hospitals and more than 300 daily deaths.

Garcetti said a vaccine mandate for city employees was working, with workers “overwhelmingly” getting their shots. He said there are 77 city employees on unpaid leave under the mandate, and that number could hit around 700 over the next couple of weeks. The city will begin testing its employees starting Friday and plans are in place to cover shifts for police and firefighters who miss work.

At 98 cases per 100,000 residents, the county is on the verge of being downgraded out of the federal Center for Disease Control's “substantial” transmission category to “widespread."

“Getting vaccinated, getting boosters, and masking up indoors and in crowded outdoor spaces remains critical as we confront the real possibility of a winter surge,” Public Health Director Barbara Ferrer said in a statement Monday.