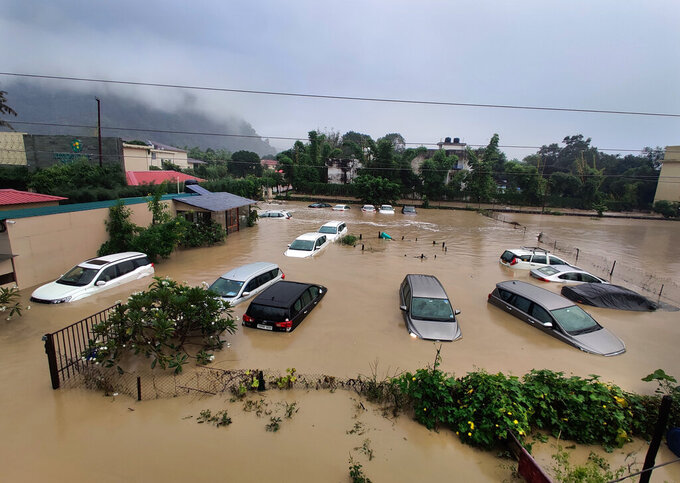 Mustafa Quraishi, ASSOCIATED PRESS
Submerged cars are seen at a flooded hotel resort as extreme rainfall caused the Kosi River to overflow at the Jim Corbett National Park in Uttarakhand, India, Tuesday, Oct. 19, 2021. More than 20 people have died and many are missing in floods triggered by heavy rains in the northern Indian state of Uttarakhand, officials said Tuesday. (AP Photo/Mustafa Quraishi)

LUCKNOW, India (AP) — At least 22 people have died and others are missing in floods triggered by heavy rains in the northern Indian state of Uttarakhand, officials said Tuesday.

The Indian Meteorological Department predicted that heavy to very heavy rain would continue to fall in the state for the next two days.

Jyoti Negi, who heads the state’s Disaster Management Cell, said 18 deaths were reported in the Himalayan resort town of Nainital, two in Almorah and one each in Champawat and Udham Singh Nagar districts.

At least eight people were missing and several others were trapped under debris, officials said. The army deployed helicopters to help with rescue efforts.

Several days of heavy rain have flooded roads and destroyed bridges in the state. Nainital remained cut off from the rest of the state as roads leading to it were either blocked by landslides or washed away.

Landslides and floods are common in India’s Himalayan north. Scientists say they are becoming more frequent as global warming contributes to the melting of glaciers there.

In February, flash floods killed nearly 200 people and washed away houses in Uttarakhand. In 2013, thousands of people were killed in floods there.