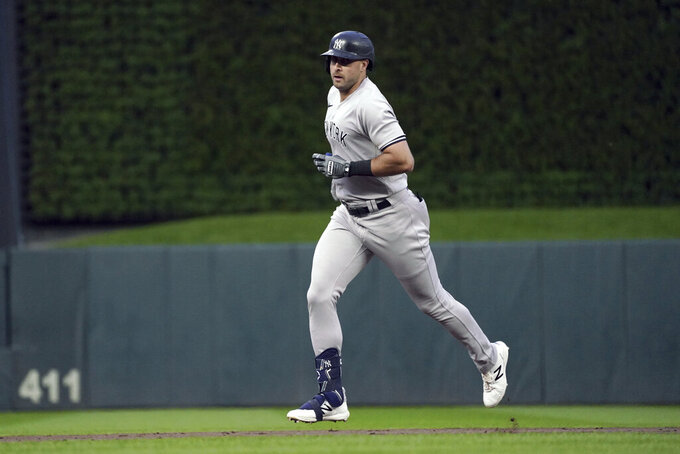 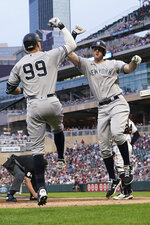 MINNEAPOLIS (AP) — Gerrit Cole gave up home runs to his first three batters and a career-high five in 2 1/3 innings but the New York Yankees rallied to beat the Minnesota Twins 10-7 Thursday night behind two home runs from Joey Gallo.

Cole left trailing 7-3, and the Yankees tied the score in the sixth when Aaron Hicks hit his second home run of the season, a two-run drive. Hicks homered after shortstop Carlos Correa and second baseman Jorge Polanco failed to communicate on Gleyber Torres' popup and allowed the ball to fall for a single.

DJ LeMahieu hit the 100th home run of his career, and the Yankees got their 16th comeback win, tying Colorado and San Francisco for the major league lead.

New York improved to 14-2-2 in series and became just the second team to win after allowing home runs to the opposition's first three batters. The Yankees' 41-16 record tops the major leagues.

“With this team, we’re never out of a game, especially that early in the game," Hicks said after his first home run since April 12. "We have a lot of veteran guys that are in this lineup that understand that you’ve got to keep pushing throughout the whole game. We’re a team that can score a lot of runs.”

Five of Minnesota’s first 16 batters homered off Cole, who had never before allowed more than three in a game. He allowed seven runs and eight hits, his ERA rising from 2.78 to 3.63.

"Stuff was just over the middle of the plate, pitch after pitch,” Cole said. “Boy that was tough, just really poor execution and just not great stuff and never really found a way to try to make it any better.”

Holmes lowered his ERA to 0.33, got his ninth save in nine chances and extended his scoreless streak to 27 innings, the Yankees' longest since Mariano Rivera finished the 1999 season with 30 2/3 innings

Gallo hit a two-run homer in the second off Dylan Bundy and combined with LeMahieu for back-to-back homers in the fifth for his seventhg multihomer game since 2001.

Aaron Judge led off the seventh with a double against Jhoan Duran (0-2) that hit the top of the wall. Judge scored on Anthony Rizzo’s single for an 8-7 lead, Hicks singled in a run later in the inning and Jovani Moran threw a run-scoring wild pitch in the eighth that bounced past former Yankees catcher Gary Sánchez.

Minnesota’s Luis Arraez, Byron Buxton and Correa became the seventh trio of teammates to open a game with three straight home runs, starting a barrage against Cole. The only previous team to lose after starting with three homers was San Diego to San Francisco on April 13, 1987.

Arraez started the onslaught on a 2-2 changeup, hitting a tying drive 396 feet into the right-field seats for his second home run this season.

Buxton drove the next pitch, a hanging slider, 422 deep into the left-field upper deck for his 14th homer.

Correa fouled off a pitch, then pulled a cutter 413 feet into the left-field lower deck for his fourth homer and a 3-1 lead.

The previous trio to accomplish the feat was Arizona’s Jarrod Dyson, Ketel Marte and David Peralta off Jerad Eickoff at Philadelphia on June 10, 2019.

Buxton gave the Twins a 6-3 lead in the second with a three-run homer on a cutter, a 370-foot drive to left, and Trevor Larnach hit a solo homer on a fastball in the third, sending the ball 441 feet into the second deck in right-center.

Buxton has three two-homer games this season and six in his career, with a three-homer game at Toronto on Aug. 27, 2017.

After Gio Urshela chased Cole with a double in the second, José Miranda flied to Hicks in center. Urshela had run past third and forgot to retouch the base when heading back to second, and was called out on appeal.

"We got to play crisper baseball if we're going to get outs in the middle of the game, late in the game, and make it happen,” Twins manager Rocco Baldelli said.

He didn't fault Correa and Polanco over the missed popup.

“I think we definitely should have won that ballgame," Baldelli said. “The reasons why we didn't, I don't think those are going to be things that are going to affect us going forward. I think these are things that we can set aside, and we can built on this game, actually, even though it was a loss.”

Even though the Twins lost two of three to the Yankees this week, the team's offense thrived against one of the hottest pitching staffs in baseball. In their previous six games, the Yankees had allowed just seven runs. The Twins scored 19 runs in the three-game series. Jameson Taillon, Nestor Cortes and Cole combined for 10 2/3 innings.

“We faced their best pitchers, who happened to be on top of the best rotation in the game right now,” Correa said. “They didn’t go past five, so that’s a positive you take out of that series, and that speaks volumes about our lineup, about our group of guys, about what we can do out there when we have a collective approach.”

Yankees: LHP Aroldis Chapman is scheduled to throw a bullpen in New York on Saturday as he recovers from left Achilles tendinitis.

Twins: Arraez returned to the lineup after missing Wednesday’s game with a sore shoulder.

Twins: The Rays come to Minneapolis to kick off a three-game set on Friday. LHP Devin Smeltzer (2-0, 1.93) will take the mound for the Twins against Tampa Bay RHP Drew Rasmussen (5-2, 3.02).