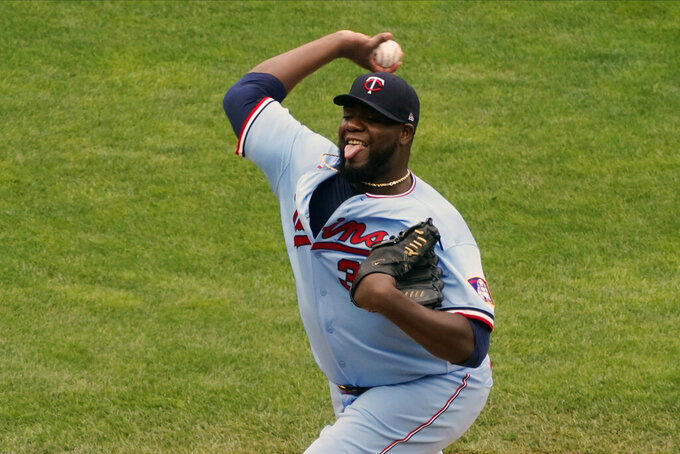 MINNEAPOLIS (AP) — Lance Lynn allowed one run over six innings in his first start since earning a spot on the AL All-Star team, and the Chicago White Sox beat the Minnesota Twins 6-1 Wednesday after cutting outfielder Adam Eaton.

Tim Anderson had four hits and Leury García hit a go-ahead, two-run homer in the second inning and added a run-scoring triple and a single.

Eaton was designated for assignment to open a roster spot for outfielder Adam Engel, who was activated off the injured list after recovering from a strained right hamstring and went 2 for 4 with a pair of doubles. The 32-year-old Eaton hit .201 with a career-low .642 OPS in 58 games during his 10th major league season.

Chicago is 10-2 against Minnesota this season, outscoring the Twins 91-47. The White Sox had 15 hits for the third time this season to go along with 18- and 16-hit games.

“We come to the ballpark every day to compete,” Anderson said. “We go out there and give it everything we’ve got and see what happens. We’ve been playing pretty good. Guys have been stepping all year and guys have been coming up and just falling into place. Couldn’t be more happy with where we’re at right now.”

Lynn (9-3) was picked Sunday for his second All-Star appearance, his first since 2012. The 34-year-old right-hander gave up four hits and three walks, striking out six. He surrendered a season-high six runs in a loss at Houston on June 19 but has allowed two runs over his last three starts and 15 innings, lowering his ERA to 1.99.

“It was a good win, especially going into the off day with three going into the break,” Lynn said. “Offense was great. We were able to add on, just kind of kept going there, and then the defense was awesome behind me. I had a little issue there with some command in the fourth and the fifth. I was able to get through it.”

Michael Pineda (3-5), returning from more than three weeks on the injured list due to right elbow inflammation, allowed a career-high 12 hits and five runs in 5 1/3 innings.

Rookie Trevor Larnach led off the fourth with his seventh home run, a drive into the bullpens in left-center. Minnesota has lost seven of nine, including five against the AL Central-leading White Sox.

“Some unlikely guys that aren’t there at the beginning of the year but are helping them in a lot of big ways,” Twins manager Rocco Baldelli said of Chicago. “But I think a lot of their success really comes down to the way they’ve pitched this year. …

“They go out there and compete very well, and hold the opposition down. I think that’s been the biggest challenge for us against them is going out there and facing those good arms and competing against those guys. You can see why they win games. They’re a good team.”

García’s third homer and Anderson’s RBI double in the fifth built a 3-1 lead, and García hit a run-scoring triple in a two-run sixth that included Jake Burger’s RBI double.

Anderson reached base all five times he came to the plate, adding a walk to go with his 12th career four-hit game. It was his second career game reaching base five times. Anderson is 11 for 21 (.524) through the first five games of the current road trip.

White Sox: C Yasmani Grandal had surgery on Wednesday to repair a torn tendon in his left knee. Grandal, who was placed on the injured list the previous day, had returned to Chicago for further testing. The White Sox expect him to return this season but will update the original diagnosis of four-to-six weeks.

Twins: 3B Josh Donaldson was out of the lineup for the fourth straight game with a strained right hamstring, Donaldson will go through a full workout before Thursday’s game before determining his status. … RHP Griffin Jax was optioned to Triple-A St. Paul to make room on the roster for Pineda.