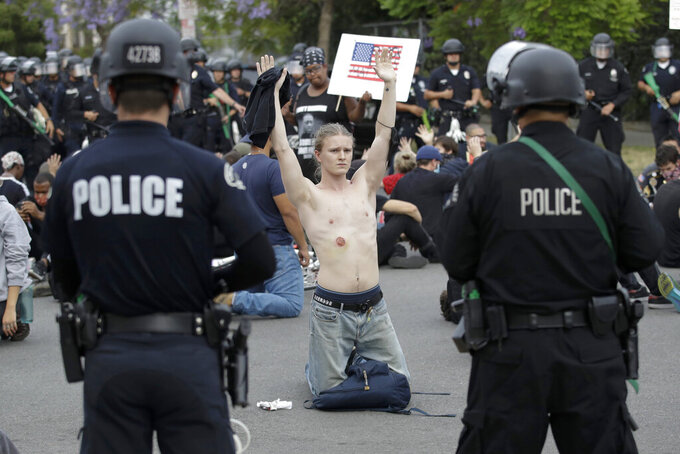 Marcio Jose Sanchez, ASSOCIATED PRESS
FILE - In this June 1, 2020, file photo, a protester raises his arm shortly before being arrested for violating a curfew in the Hollywood area of Los Angeles. Two reviews of the violence that surrounded last summer’s police brutality protests in Los Angeles say the LAPD wasn’t prepared to react when peaceful demonstrations were marred by clashes, vandalism and looting. The Los Angeles Times says the reports, released Friday, April 9, 2021 found that poor planning, inconsistent leadership and inadequate training contributed to disorder in the streets that caused an estimated $167 million in losses to private property and businesses owners. (AP Photo/Marcio Jose Sanchez, File)

The reports released Friday found that poor planning and leadership and inadequate training contributed to disorder in the streets that caused an estimated $167 million in losses to private property and businesses owners, the Los Angeles Times reported.

The reports also concluded that nearly 570,000 doses of drugs, including amphetamines and strong painkillers, were stolen or went missing from burglarized pharmacies, the Times said.

The May protests were among those sparked across the nation by the police killings of George Floyd in Minneapolis and Breonna Taylor in Kentucky.

On May 30, large crowds clashed with LAPD officers in riot gear. Some police vehicles were burned and authorities said organized caravans of criminals took advantage of the disorder to smash windows and loot stores.

The LAPD made thousands of arrests, including many involving protesters who failed to disperse or ignored curfew orders.

The violence ceased after the National Guard was called in, although peaceful protests continued.

Officers reported more than 100 injuries and more than 50 civilians reported being injured by officers, 17 of them seriously, the Times said.

The city is facing several lawsuits over the protest response, which critics say involved excessive force.

The report said police training was geared for handling short-term, planned demonstrations in a single area and didn't help when “spontaneous and leaderless groups emerged throughout the city and violence broke out from within the crowd.”

Commanders from different areas went to the same scenes and issued contradictory orders that complicated “an already chaotic situation,” the report said.

In a letter to the civilian Police Commission that accompanied the report, Chief Michel Moore said most officers performed “admirably" but there were “missteps and shortfalls in communication and command and control."

A second report produced for the Police Commission found that the “extent of the protests and the level of violence associated with them overwhelmed the LAPD and led to resources being deployed without clear missions or assignments.”

The reports were scheduled to be discussed at Tuesday's Police Commission meeting.

Last month, another report to the City Council also cited lack of preparation and training, along with a “chaos of command.”

The Police Department said it has retrained 4,000 officers on crowd control and begun new policies for field arrests that may prevent similar problems in the future.

On Friday, Mayor Eric Garcetti said the city “must reimagine public safety in Los Angeles by reflecting on our actions, and using the lessons learned to shape our future.”