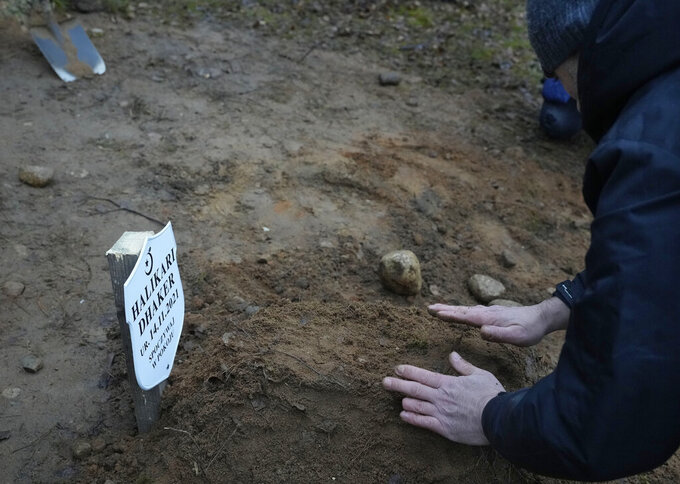 Czarek Sokolowski, ASSOCIATED PRESS
Two members of a Muslim community bury the tiny white casket of an unborn Iraqi boy, in Bohoniki, Poland, on Tuesday Nov. 23, 2021. The child is the latest life claimed as thousands of migrants from the Middle East have sought to enter the European Union but found their path cut off by a military build-up and fast approaching winter in the forests of Poland and Belarus. (AP Photo/Czarek Sokolowski) 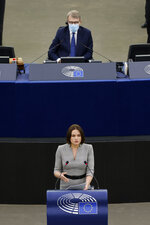 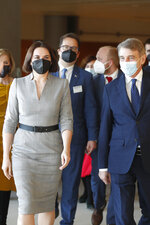 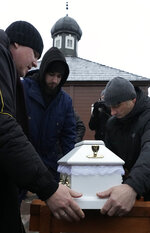 BRUSSELS (AP) — Belarus opposition leader Sviatlana Tsikhanouskaya appealed Wednesday to the European Union not to forget the plight of ordinary citizens and political prisoners in the former Soviet country.

Tsikhanouskaya's plea came as the EU prepares new sanctions in response to a security crisis at its borders blamed on Belarusian President Alexander Lukashenko.

Tsikhanouskaya told EU lawmakers that “882 of my fellow citizens have been recognized to be in prison for exercising basic political rights people in the rest of Europe take for granted.” She urged the 27-country bloc not to recognize Lukashenko or his government, and to boost support to ordinary citizens.

“It is getting late. Since August 2020, there have been ample gestures and expressions of solidarity. Belarusians were praised for reigniting their faith in democracy and human dignity,” she said. “Is it not the turn of Europeans to demonstrate their commitment to those values with action?”

Her remarks come as the EU prepares to unveil a new raft of sanctions against Belarus –- it’s fifth package of travel bans and asset freezes — targeting Lukashenko and his associates, government members, security forces, court officials and other authorities.

This time, though, the measures will also hit air carriers and travel groups accused by the EU of helping to bring migrants to Belarus with the aim of helping them cross into Europe, chiefly through Poland, Lithuania and Latvia, according to a draft text seen by The Associated Press.

The EU says Lukashenko is carrying out a “hybrid attack” using migrants to destabilize the bloc in revenge for sanctions targeting him over a contested election last year that gave Belarus’ hardline leader a sixth term in office and the security crackdown on peaceful protestors that followed.

With that in mind, the EU is targeting Belarus airlines Belavia.

“Migrants wishing to cross the Union’s external border have been flying to Minsk on board flights operated by Belavia from a number of Middle Eastern countries, in particular Lebanon, UAE (United Arab Emirates) and Turkey,” the document said.

Cham Wing Airlines, which operates flights from Syria to Belarus, is also in the EU’s sights. It stands accused of ramping up flights from Damascus to Minsk over the summer and setting up new offices in the Belarus capital to better organize the shuttles.

Also on the list is state tourism company Tsentrkurort, which the EU claims helped at least 51 Iraqis obtain visas to Belarus and organized bus transport for them to the borders.

The Hotel Minsk company and Hotel Planeta, which are linked to the Belarus President Property Management Directorate, are accused of lodging migrants aiming to reach the border.

The EU will also take aim at VIP Grub, a passport and visa service based in Istanbul, Turkey. The draft sanctions listing says the company “organizes trips to Belarus with the explicit intention of facilitating migration to the EU. VIP Grub actively advertises migration to the EU.”

The sanctions are set to be approved in coming days.

“Sanctions do work,” Tsikhanouskaya said. “Sanctions split the elites, destroy corruption schemes, and divide people around Lukashenko.” She urged the EU not to “to further invest in the mafia regime. Send a message that we will not enrich it so that it can use these resources to abuse its citizens.”

Meanwhile, Ukraine launched a special operation on its border with Belarus aimed at boosting security to stop migrants entering. It comes as hundreds of people, mostly from the Middle East, remain stranded in Belarus at the Polish border, trapped as forces from the two countries face off.

Ukrainian authorities said last Friday that they intercepted 15 people of Middle Eastern descent attempting to cross in from Belarus -- the first such incident on the Ukrainian border since the security crisis flared at the EU frontiers.

Ukraine shares a 1,084-kilometer (678-mile) border with Belarus, and Ukrainian Interior Minister Denys Monastyrskiy has announced plans to build a fence on the borders with Belarus and Russia in the wake of the incident.

Russia has staunchly supported its ally Belarus in the latest crisis, urging the EU to negotiate a settlement in direct talks with Lukashenko's government.

Russian President Vladimir Putin repeated the message in Wednesday's call with European Council President Charles Michel, noting that the EU's plan to introduce a new round of sanctions against Belarus is “counterproductive.”

The Kremlin said in its readout of the call that Putin pointed at the use of water cannons, tear gas and stun grenades by Polish forces and voiced hope that Michel could persuade Warsaw to stop “using violence against migrants and avoid actions that could lead to the escalation of the situation.”

Frank Jordans in Berlin, Yuras Karmanau in Kyiv, Ukraine and Vladimir Isachenkov in Moscow contributed to this report.