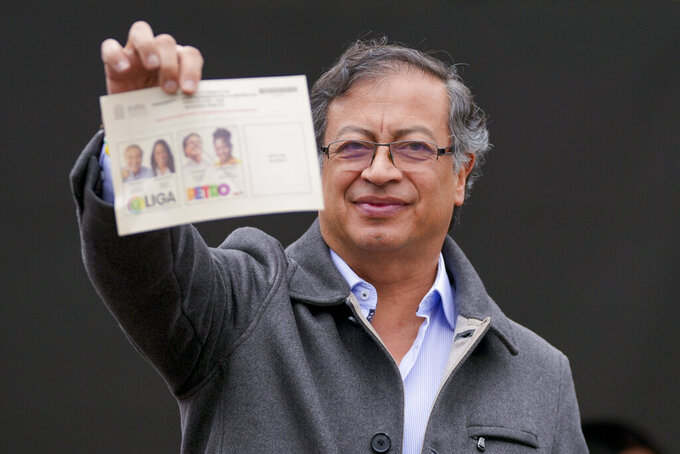 BOGOTA, Colombia (AP) — It’s one of the United States’ few enduring alliances in an often-turbulent Latin America, one built around a decades-long partnership combating the nation’s drug cartels.

But Gustavo Petro’s election as Colombia’s first leftist president is likely to test the U.S.’ special relationship with a major non-NATO ally like never before.

During the hard fought contest, Petro, a former guerrilla, took aim at forced coca eradication and extradition — centerpieces of the U.S.-backed drug war — as well as a free trade agreement with the U.S. he blames for impoverishing Colombian farmers

It remains to be seen whether he can implement his progressive agenda amid a fractured congress and opposition from powerful elites.

But just his promise of sweeping change in a country that has long been a bulwark of regional stability has many in Washington on edge — even if tracks the left’s resurgence throughout Latin America and was embraced by millions of Colombians fed up with enormous inequality and social injustice.

“Our combined efforts to combat transnational crime are over,” said Kevin Whitaker, a retired U.S. diplomat who served as ambassador in Bogota from 2014 to 2019. “There’s no doubt that he’s going about this in a very different manner.”

But while Whitaker is skeptical of Petro’s motives and effectiveness as a leader, he said he couldn’t be in more agreement with his campaign’s overarching focus: boosting the presence of the state, not just security forces, in the long-neglected countryside.

“If he is able to explain his plan to the U.S., and bridge the deep urban-rural divide that has long been Colombia’s biggest challenge, then it doesn’t have to be a conflictive relationship,” said Whitaker.

The U.S. helped Colombia pull back from the brink in 1999 with the launch of Plan Colombia to counter drug trafficking and the guerrillas who funded their insurgency through the transport of cocaine. Since then, successive Republican and Democratic administrations have provided more than $13 billion in military and economic assistance to Colombia — vastly more than any other country in Latin America.

Petro, 62, during the campaign criticized the linchpins of that bipartisan strategy.

On extradition, he said his government would prioritize truth-telling and compensation for the victims of powerful criminal groups rather than sending capos to the U.S. to face justice. Every year, under special presidential order, Colombia extradites dozens of drug traffickers charged in the U.S.

He also attacked the forced eradication of coca — the base ingredient of cocaine — for criminalizing otherwise law-abiding peasants and proving ineffective in reining in a record harvest. Instead, he would favor expanding crop substitution programs that provide credit, training and land rights to rural farmers.

All of Petro’s goals, however admirable, face huge obstacles.

In the U.S., a large bureaucracy consisting of hundreds of federal law enforcement agents has built up around close cooperation that will be difficult to unwind, says Whitaker.

Petro is also likely to face stiff resistance from inside the Colombian armed forces, whose influence has expanded greatly on the back of U.S. assistance and training.

Then there are the criminals themselves, who are unlikely to stand by idly if their profits are threatened. Despite being enshrined in a 2016 peace accord with the country’s largest rebel groups, voluntary crop substitution accounted for less than 1% of the 130,147 hectares of coca fields eradicated in 2020 — a sign of just how tenuous the state’s presence remains outside urban centers.

“A significant dialing back of the security component would strengthen the hands of the criminal actors and would be a point of friction with the U.S.,” said Cynthia Arnson, a fellow at the Wilson Center in Washington and a longtime observer of Colombia.

In other areas, such as trade and Venezuela, Petro could also clash with the U.S. His campaign platform calls for the creation of “smart tariffs” to protect Colombia’s countryside from agricultural imports allowed under a decade old free trade agreement with the U.S.

On Venezuela, he would re-establish relations with Nicolas Maduro’s socialist government — a move likely to anger many Republicans in Congress and unsettle the nearly 2 million Venezuelan migrants who have sought refuge in Colombia.

So far, Petro has avoided fueling any discord. In a 40-minute victory speech, he didn’t mention the drug war once and his only reference to the U.S. was a call for dialogue to jointly address climate change — a priority for the Biden administration.

“It’s time to sit down with the United States and talk about what it means the fact that they, like no other country in the Americas, are the source of greenhouse gases that we absorb in our Amazonian jungle,” he said.

The U.S. has been similarly restrained, touting the fact that Petro’s victory came on the 200th anniversary of the day Colombia became the first former Spanish colony to be recognized as an independent state by the U.S.

On Tuesday, President Biden spoke with Petro, congratulating him and Vice President Francia Marquez — a prominent environmental activist — on their election. During the call, Biden underscored his interest in strengthening bilateral cooperation on climate change, health security and implementation of the peace accord, according to the White House.

“President Biden also welcomed the opportunity to discuss bilateral security and counternarcotics cooperation,” the White House said in a statement.

But while Petro, a former senator and mayor of the capital, Bogota, has been a fixture of politics for decades, the U.S. has had only limited contact with him over the years.

That in part reflects what, until recently, had been the limited prospects for the left in the socially conservative country. But the 2016 peace deal lifted many activists’ fears and breathed life into new demands by younger Colombians less burdened by the bloody conflict. Petro, after losing the 2018 presidential contest, then skillfully rode the wave of discontent, benefiting from protests during the pandemic that paralyzed the outgoing conservative government of Iván Duque and laid bare the consequences of inequality worse than any other country in Latin America except Brazil.

During Petro’s slow rise, U.S. officials described him alternately as a radical “populist” in the mold of the late Venezuelan leader Hugo Chavez, according to a 2006 secret U.S. Embassy cable published by pro-transparency group Wikileaks, or “pragmatic,” according to another report sent two years later.

Whichever leadership style he embraces as president remains to be seen. But Petro has already made clear that in contrast with his predecessors, he’s likely to look less to Washington and seek closer ties with fellow leftists in places such as Mexico, Chile and Argentina.

Biden's longtime aide on Latin America has also in the past taken some pointed shots at Petro. During the 2020 U.S. presidential campaign, Juan Gonzalez, now the National Security Council's senior director for the Western Hemisphere, compared Petro's apparent support for Biden to former KKK leader David Duke's endorsement of Trump.

"To be clear, Biden does not know or care about Gustavo Petro’s opinion," said Gonzalez, who at the time was trying to defuse the Trump campaign's strategy among Latino voters in Florida of comparing Biden to Chavez or Cuba's Fidel Castro.

The opportunity for the U.S. to influence the direction of his government has also been limited by the departure earlier this month of Ambassador Philip Goldberg to take up his new assignment in South Korea. The Biden administration has yet to nominate a replacement.

“It’s beyond disappointing that the Biden team has not nominated an ambassador to shepherd U.S. policy through this critical transition period,” said John Feeley, a former U.S. ambassador to Panama who also served as a diplomat in Colombia during the hunt for Medellin cartel boss Pablo Escobar in the 1990s. “They can’t blame Republican obstructionism in the Senate for this one and they would do well to announce a nominee ASAP.”