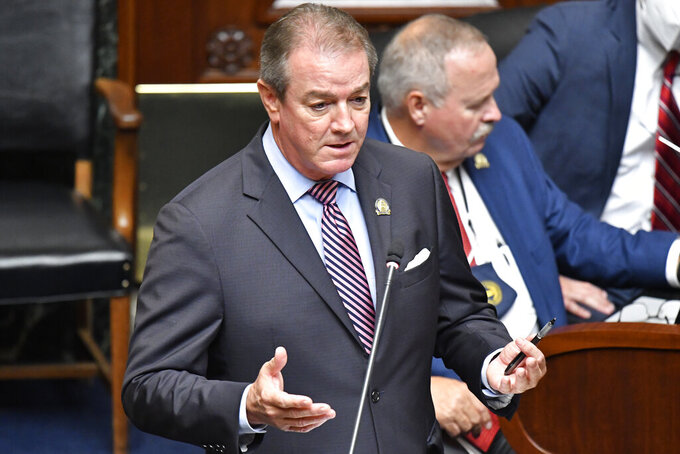 On the second day of a special session focused on COVID-19 issues, House and Senate panels endorsed bills to strengthen the Bluegrass State's bargaining hand in competing against other states for massive business development projects.

The incentives — requested by Gov. Andy Beshear's administration — would apply to projects topping $2 billion. Beshear has said the state is pursuing at least five projects of that magnitude.

Meanwhile, a key coronavirus-related bill had a bumpy reception Wednesday but ultimately advanced. The measure, which would set pandemic policies for K-12 schools, was rejected initially by the House Education Committee, coming up one vote short of the support needed.

The panel reconvened later in the day and overwhelmingly advanced the legislation. Some lawmakers said they voted for the bill to get it out of committee but signaled they'd like to see changes made. A companion measure is awaiting action in the Senate. Republicans hold overwhelming majorities in both chambers.

The bills would nullify statewide mask mandates in K-12 schools and child care facilities. Both would allow local school leaders to apply remote instruction to a particular school, grade or classroom, depending on the extent of a virus outbreak, rather than closing schools districtwide.

State Education Commissioner Jason Glass has urged lawmakers to follow public health science supporting use of masks in schools, as he said the state school board did in issuing its emergency regulation requiring mask wearing in public schools. The bills would end that requirement.

“The politically motivated effort to remove masking requirements in public schools flies in the face of virus mitigation efforts at the very time they are needed most,” he said in a statement Tuesday.

Supporters of lifting the statewide mandate said mask policies should be determined by local school boards in consultation with health officials.

Kentucky has been hit a record wave of COVID-19 cases and hospitalizations, driven by the fast-spreading delta variant. Children have made up a large number of new virus infections. Kentucky’s coronavirus-related death toll has surpassed 7,930.

On Tuesday, lawmakers gave swift final approval to a measure extending the pandemic-related state of emergency until Jan. 15. Beshear quickly signed the measure. It extends a number of actions taken by the Democratic governor and his administration to combat COVID-19. Examples include waiving licensing requirements for out-of-state medical providers and preventing price gouging.

Incentives meant to lure mega developments would include up to $350 million in forgivable state loans. Another $50 million would be spent on worker training to supply a skilled workforce. The money would be drawn from the state’s budget reserve trust fund, which now has nearly $2 billion.

“This puts us in the game," Adkins said in promoting the incentives. "This allows us to compete.”

Much of the attention has revolved around a large tract of land in Hardin County specifically mentioned in the legislation. The Glendale site, just off Interstate 65, was offered two decades ago when Kentucky was trying to land a Hyundai auto manufacturing plant that ultimately located in Alabama. Glendale is about 50 miles (80 kilometers) south of Louisville.

While the state continues to promote the Glendale mega site, it's also hearing from business prospects showing interest in other Kentucky locations, Adkins said.

A $2 billion-plus development would be certain to create loads of new jobs, with plenty of spinoff opportunities for even more job growth.

“We're in competition with other states that are offering to just write blank checks,” Republican Senate Majority Floor Leader Damon Thayer said in supporting the incentives.

The bill also includes safeguards and oversite provisions to protect the investments and guarantee that lawmakers are able to monitor the incentives program, its supporters said.

Beshear has touted Kentucky’s economic resurgence even as the delta variant has caused the surge of COVID-19 cases and hospitalizations.