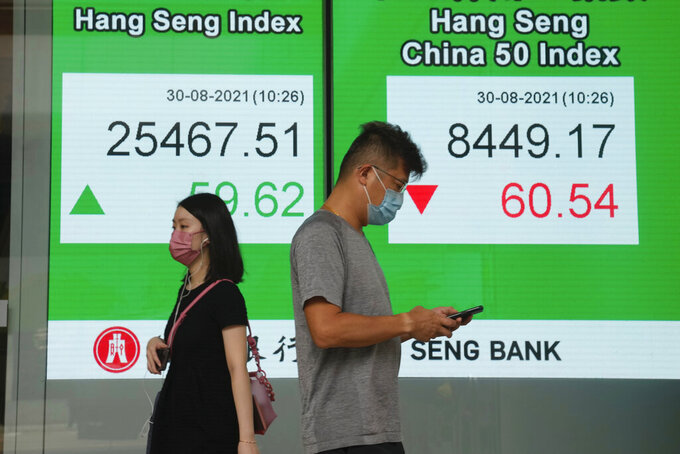 TOKYO (AP) — Asian shares were mostly higher Monday, as investors interpreted comments from the head of the U.S. Federal Reserve as signaling low interest rates were here to stay for some time.

Regional investors are also looking ahead to data expected to be released Tuesday on China's manufacturing sector.

The speech by Fed Chair Jerome Powell was key, as U.S. stocks have set record after record this year, in large part because of the Fed's massive efforts to prop up the economy and financial markets. The gains had been getting increasingly tentative as markets began to look toward a possible end of the Fed’s assistance.

Last week, Powell noted past mistakes where policy makers made premature moves in the face of seemingly high inflation. He made clear a slowing of the Fed's bond purchases doesn't mean a rise in short-term rates is imminent. That would require the job market and inflation to hurdle “substantially more stringent” tests.

“We have much ground to cover to reach maximum employment," Powell said.

Stocks of U.S. companies whose profits are most closely tied to the economy made the biggest gains following the speech.

One problem Powell noted was the delta variant of the coronavirus, which remains a global concern. The delta variant is behind the recent surge in COVID-19 infections in Asia, where the vaccine rollout has been slower than parts of the U.S. and Europe.

“With the spread of the delta variant still rife and the vaccination drive slow, Singapore being the exception, the path out of the pandemic is unpredictable, fraught with setbacks and periodic lock downs,” said Venkateswaran Lavanya at Mizuho Bank in Singapore.

The delta variant has already slowed some economic activity. In the U.S.. a report on Friday showed that consumer spending in the country rose 0.3% in July from June, a sharp slowdown from the prior month’s 1.1% jump. That’s a big deal when consumer spending is the driving force of the U.S. economy, and its growth slowed even though income growth for Americans accelerated to 1.1% last month.