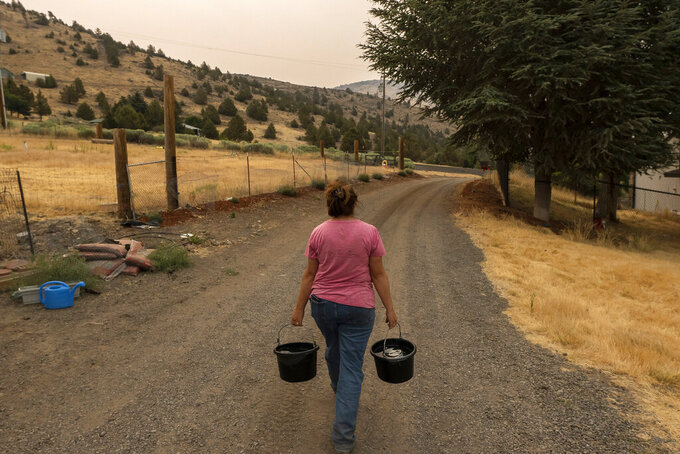 Nathan Howard, ASSOCIATED PRESS
FILE - Misty Buckley carries dirty water from her animals' pens to water plants in her front yard, Saturday, July 24, 2021, in Klamath Falls, Ore. Farms that rely on irrigation from a depleted, federally managed lake on the California-Oregon border, along with a Native American tribe fighting to protect fragile salmon, will both receive greatly reduced amounts of water again in the summer of 2022 as a historic drought and record-low reservoir levels drag on in the U.S. West. (AP Photo/Nathan Howard, File)

PORTLAND, Ore. (AP) — A Native American tribe in Oregon said Tuesday it is assessing its legal options after learning the U.S. government plans to release water from a federally operated reservoir to downstream farmers along the Oregon-California border amid a historic drought.

Even limited irrigation for the farmers who use Klamath River water on about 300 square miles of crops puts two critically endangered fish species in peril of extinction because the water withdrawals come at the height of spawning season, The Klamath Tribes said. This summer's water allocation plan, released by the Bureau of Reclamation last week, will send about 50,000 acre-feet of water to farmers in the Klamath Reclamation Project — less than 15% of what they would get in a normal year.

An acre-foot is the amount needed to cover one acre of land with water one foot deep.

It’s the third year in a row that extreme drought has affected the farmers, fish and tribes that rely on the 257-mile-long Klamath River in a region where, even in a good year, there’s not enough water to satisfy competing demands. Last year, no water at all flowed through the Klamath reclamation project’s main irrigation canal, and the water crisis briefly became a political flashpoint for anti-government activists.

At the same time, critically endangered sucker fish central to the Klamath Tribes culture and religion didn't have enough water to spawn and thousands of downstream juvenile salmon died without reservoir releases to support the Klamath River’s health.

The Klamath Tribes said in a statement that the decision to release any water to about 1,000 farmers in the massive, federal agricultural project was “perhaps the saddest chapter yet in a long history of treaty violations" and placed the blame for the current water crisis on “120 years of ecosystem mismanagement at the hands of settler society."

The inland tribes, based in Chiloquin, Oregon, include the Klamath, Modoc and Yahooskin peoples of southern Oregon and northern California. The Klamath have fought to keep enough water in the reservoir and surrounding rivers for two distinct species of sucker fish to survive and breed, with limited success.

The fish are important to the tribes' cultural and religious practices and were once a dietary staple. The Klamath stopped fishing for the sucker fish in the 1980s as numbers dwindled. The Klamath Tribes now run a captive breeding program to ensure the species' survival and note that no juvenile sucker fish have survived in the wild in recent years.

"We have nothing left with which to ‘compromise,’ ” the Klamath Tribes said in a statement. “Global warming is certainly a global problem, but thus far its local consequences appear to be exacerbating existing and systematic inequalities between ourselves and the larger society.”

A spokeswoman from the Bureau of Reclamation declined to comment Tuesday, citing the possibility of litigation.

The Klamath Tribes believe this year's plan violates a biological opinion under the Endangered Species Act, which says that the bureau must maintain the reservoir, which is called Upper Klamath Lake, at a minimum depth for the sucker fish. The opinion acknowledges that in some cases — such as this year — maintaining even that minimum depth may be impossible, but in those cases the bureau must do everything it can to comply.

“We feel like Reclamation has pushed us into a corner by making this allocation decision that is so directly contrary to the requirements of the Endangered Species Act,” said Jay Weiner, a water rights attorney representing The Klamath Tribes. “For them to pull additional water out … is a risk to the very existence of the species that the tribes can’t live with.”

Last weekend, federal regulators also released a three-day pulse of water from the reservoir down the Klamath River to bolster the health of salmon populations in northern California that have been decimated by a parasite that thrives in slow-moving, warm water.

The amount was half of what would be released in a normal year, and the Yurok Tribe, which is trying to keep the salmon populations afloat, said it was also deeply disappointed by this season's water allocations.