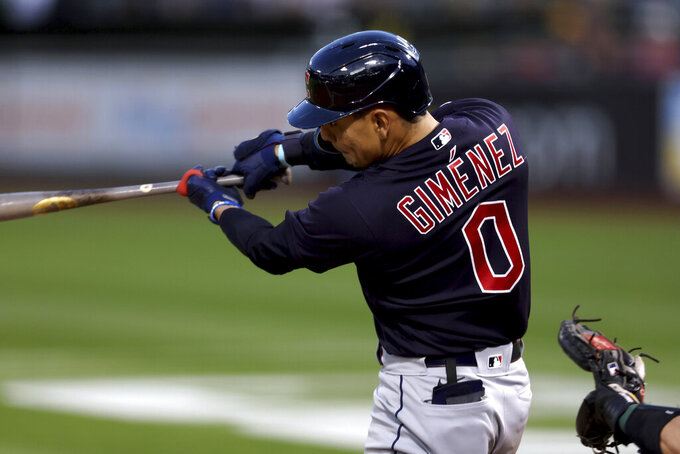 “Things didn’t go our way a lot of the game, but they kept at it, and that’s good,” Guardians manager Terry Francona said. “You don’t want to fall into that rut where something goes wrong and oh no, here we go again.”

Ramírez also homered in his 1,000th career game with Cleveland, which won for the first time since completing a sweep of the Chicago White Sox on April 21.

Sheldon Neuse had three hits and three RBIs for Oakland. Sean Murphy added a three-run homer as the A’s failed to hold leads of 4-1 and 8-5 in a game in which ace Frankie Montas struggled.

Montas allowed five runs in five innings and walked four — matching the total from his first four starts this season.

“Frankie battled himself a little bit tonight,” A’s manager Mark Kotsay said. “Didn’t have his best command and went away from his two-seamer. Made a mistake over the middle and they capitalized.”

Trevor Stephan (2-0) pitched two scoreless innings for the win. Emmanuel Clase overcame Kevin Smith’s leadoff double in the ninth and picked up his third save.

Giménez and Myles Straw each had three hits for Cleveland.

“We kind of got knocked down, we took the lead then we got hit in the mouth back,” Stephan said. “For the bats to keep us in there when the pitching struggled a little bit, it was just a good team win.”

Murphy’s three-run home run off Guardians starter Aaron Civale in the first snapped a 2-for-19 slump for the A’s catcher.

Civale struggled through another rough outing, allowing six runs in four innings. The right-hander has given up 15 earned runs over his last 11 innings — a 12.27 ERA in that span.

Giménez crushed a 3-2 pitch from Montas in the third inning after the A’s pitcher gave up a leadoff single and back-to-back walks. The grand slam earned a Guardians fan a new vehicle as part of a promotion in Cleveland.

“I’m really happy for her,” Giménez said through an interpreter. “That was kind of a momentum changer for us. I got more excited about that than the fact that it was a grand slam.”

A’s center fielder Christian Pache was presented with a minor league Gold Glove by Kotsay before the game for his work last season. Part of the trade that sent Matt Olson to Atlanta in March, Pache has made several spectacular catches for Oakland this season and likely will remain the starter there when Ramón Laureano returns from his MLB suspension in May.

Former A’s catcher and longtime broadcaster Ray Fosse, who passed away in October, was honored during a pregame ceremony when the team unveiled a large, yellow RAY logo with a microphone on the outfield wall in left-center field.

Athletics: 2B Tony Kemp left in the seventh, one inning after getting hit by a pitch. Kevin Smith, activated off the 10-day injured list before the game, replaced Kemp. … 1B Mickey McDonald was optioned to Triple-A Las Vegas and RHP Ryan Castellani was returned to Las Vegas.