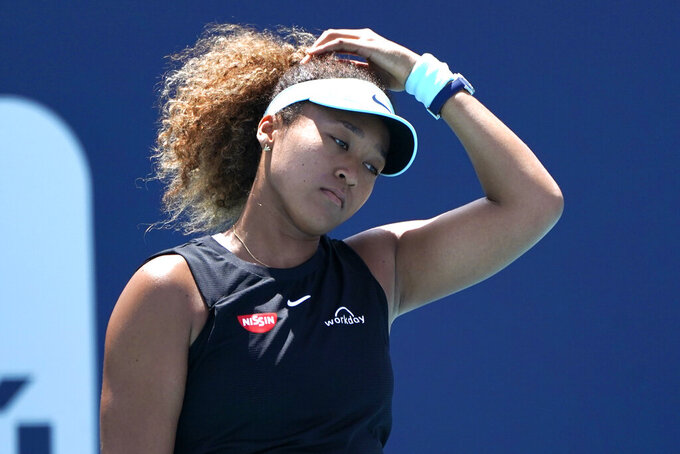 Lynne Sladky, ASSOCIATED PRESS
FILE - Naomi Osaka, of Japan, reacts during her match against Maria Sakkari, of Greece, in the quarterfinals of the Miami Open tennis tournament in Miami Gardens, Fla., in this Wednesday, March 31, 2021, file photo. Sakkari won 6-0, 6-4. Naomi Osaka withdrew from the French Open on Monday, May 31, 2021, and wrote on Twitter that she would be taking a break from competition, a dramatic turn of events for a four-time Grand Slam champion who said she experiences “huge waves of anxiety” before speaking to the media and revealed she has “suffered long bouts of depression.”(AP Photo/Lynne Sladky, File)

Stuart Duguid wrote Thursday in an email that Osaka “is taking some personal time with friends and family. She will be ready for the Olympics and is excited to play in front of her home fans.”

Osaka, a 23-year-old who was born in Japan, withdrew from the French Open after the first round, saying she needed a mental health break.