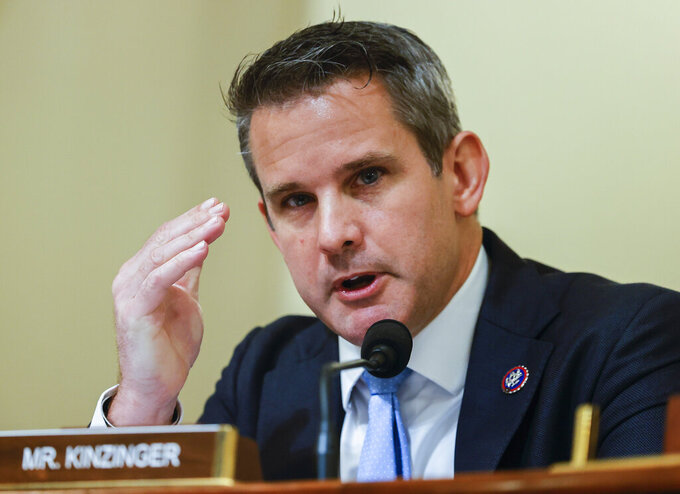 Jim Bourg, ASSOCIATED PRESS
FILE - In this July 27, 2021 file photo, Rep. Adam Kinzinger, R-Ill., speaks on Capitol Hill in Washington. Illinois Democrats are poised to approve new congressional district maps that would give Democratic candidates an advantage in elections over the next decade and eliminate at least one GOP-held district as the party fights to keep control of the U.S. House in 2022. Democrats who control state government released their proposed maps Friday, Oct. 15, 2021. (Jim Bourg/Pool via AP)

CHICAGO (AP) — Illinois Democrats are poised to approve new congressional district maps that would give Democratic candidates an advantage in elections over the next decade as their party fights to keep control of the U.S. House in 2022.

Democrats who control state government released their proposed maps Friday, and lawmakers are scheduled to meet in Springfield to pass the new maps before the end of the month.

The map puts GOP Rep. Adam Kinzinger, one of 10 Republicans who voted to impeach President Donald Trump, in the same left-leaning district as first-term Democratic Rep. Marie Newman. The district currently held by GOP Rep. Rodney Davis — where a Democrat who served in President Joe Biden's administration already is running — was redrawn to include more Democrat-friendly territory and not Davis' hometown. Two other GOP lawmakers were drawn into the same district.

The process has angered Republicans and some other groups, who say Democrats are barrelling ahead with partisan maps drawn behind closed doors. Democrats have held a series of public hearings — almost all without any draft maps for the public to comment on — but most have been attended only by lawmakers meeting virtually. For one meeting, Democrats publicized the wrong address.

“Illinois Democrats, led by Governor JB Pritzker, have made it clear that they are willing to disenfranchise Illinois voters and break repeated campaign promises to do the bidding of Nancy Pelosi and DC power brokers," Illinois GOP Chairman Don Tracy said in a statement. “Call this new Illinois map the Nancy Pelosi Protection Plan.”

Democratic state Rep. Elizabeth Hernandez, chairperson of the House Redistricting Committee, called the proposal “an excellent first draft that amplifies diverse voices and gives every person in our state a say in government.”

Partisan mapmaking is happening across the country as part of redistricting, the once-a-decade process of redrawing political districts, and Republicans control the process in more states than Democrats — including states such as Texas and Florida that are gaining congressional seats due to population growth. Democrats currently hold a narrow majority in the House, making redistricting in Democratic-controlled states such as Illinois and New York particularly important to the party.

Illinois' congressional delegation is made up of five Republicans and 13 Democrats. But the state is losing a congressional seat due to population loss, bringing the delegation to 17. The new map is intended to elect 14 Democrats and three Republicans. Democrats hold supermajorities in both chambers of the Legislature, making passage of their plan all but certain. And Pritzker, a Democrat, already has approved new legislative maps drawn by politicians despite a promise on the campaign trail not to do so.

Most of Illinois' population loss over the past decade was in central and southern Illinois, where Democrats' proposed congressional maps put Republican Reps. Darin La Hood and Mary Miller in the same district.

In a statement Friday, Kinzinger said he and his team will spend time looking over the maps “and reviewing all of the options, including those outside the House.” He and Davis have said they were waiting to see the new maps before deciding whether to seek some other office, such the governorship or the U.S. Senate seat currently held by Democratic Sen. Tammy Duckworth.

Davis, whose home is in an oddly shaped district that spans from the Indiana border to nearly the Wisconsin border, called the proposed map and the redistricting process “a complete joke.” Democrat Nikki Budzinski, who served as chief of staff for Biden's Office of Management and Budget, is seeking the 13th district seat currently held by Davis. Under the Democrats' plan, it's a narrow slice that runs from the Champaign area — home to the University of Illinois — southwest to Springfield and the Illinois communities east of St. Louis.

The western Illinois district where Democratic Rep. Cheri Bustos won in a tight 2020 race now includes all of the Rockford area, then stretches south and east to include Peoria and much of Bloomington, which is home to Illinois State University. Bustos is not running for reelection but Democrats want to keep the district in the party’s hands.

The redistricting process has drawn criticism and lawsuits, and not just from Republicans. The Mexican American Legal Defense and Educational Fund has sued to block the new legislative maps, saying Latino voters wouldn't be properly represented. At hearings for the congressional maps, representatives of the League of Women Voters called the process for drawing both maps “lacking” in transparency.

Jay Young, executive director of Common Cause Illinois, told lawmakers Friday that many community groups and voters who weighed in on redistricting early in the process have given up because “many feel they haven't been listened to.”

Legal challenges also are expected to be filed over the proposed congressional maps.