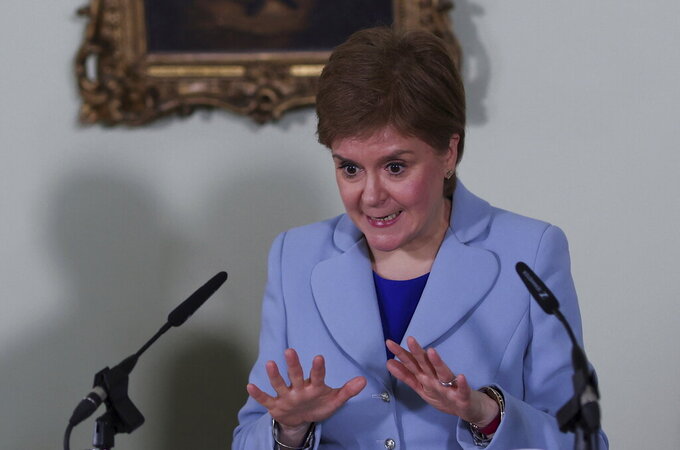 Russell Cheyne, ASSOCIATED PRESS
Scotland's First Minister Nicola Sturgeon speaks at a press conference for the launch of new paper on Scottish independence, in Bute House, Edinburgh, Scotland, Tuesday, June 14, 2022. Sturgeon launched her campaign for a second independence referendum on Tuesday, arguing that Scotland would be economically better off outside the United Kingdom. (Russell Cheyne/PA via AP)

LONDON (AP) — Scotland's leader told lawmakers in Edinburgh Tuesday that she plans to hold a fresh referendum on Scotland's independence on Oct. 19, 2023 — even though U.K. Prime Minister Boris Johnson maintains it wasn't the right time for such a vote.

First Minister Nicola Sturgeon said the question to be asked will be the same as that in Scotland’s first independence vote in 2014: “Should Scotland be an independent country?”

The U.K.-wide government of Johnson opposes a new referendum and has repeatedly said the issue was settled in 2014, when 55% saying they wanted to remain part of the United Kingdom.

Scotland’s government requires a special order from Johnson to legally hold a referendum.

Sturgeon said she will ask the U.K. Supreme Court to rule on the Scottish government’s right to hold the vote if Johnson does not give the go-ahead.

Scotland’s most senior law official has referred the matter to the top court on Tuesday, she said.

She added that she would be writing to Johnson to inform him of her plans.

Sturgeon, who leads the Scottish National Party and the devolved government in Scotland, insists it’s time to revisit the matter of independence, not least because of Britain’s exit from the European Union — a move opposed by a majority of Scots.

“My determination is to secure a process that allows the people of Scotland, whether yes, no or yet to be decided, to express their views in a legal, constitutional referendum so the majority view can be established fairly and democratically,” she said Tuesday.

Johnson said he would study Sturgeon’s plans for a second referendum, but stressed that “the focus of the country should be on building a stronger economy."

“We will study it very carefully and we will respond properly ... I certainly think that we’ll be able to have a stronger economy and a stronger country together," he told reporters.

A spokesman for Johnson’s office said his position is unchanged and he “continues to think it’s not the time to be talking about a referendum.”

The spokesman said the government will not be drawn into “hypotheticals” about whether it would open negotiations for Scottish independence if Scots vote for it in a referendum next year.

Even if the referendum does go ahead as proposed, a majority vote will not by itself make Scotland independent from the rest of the U.K.

“For Scotland to become independent following a yes vote, legislation would have to be passed by the U.K. and Scottish Parliaments,” Sturgeon stressed.

Sturgeon maintains that her party's success in local elections last year gives her a mandate for a fresh referendum. While the Scottish National Party did not win overall control in the Scottish Parliament, the election of a record number of Scottish Green lawmakers means there is a majority for a new independence vote.

Sturgeon said that if there was no lawful way for the Scottish government to hold a referendum, and if Johnson’s government refused to grant permission for such a vote, she would fight the next U.K. general election on the single issue of independence.

Opposition parties have criticized Sturgeon for her “obsession” with holding a new independence vote and say she should instead be focused on more practical matters such as tackling the soaring cost of living.

“A potentially illegal referendum next year is the wrong priority for Scotland,” Scottish Conservative leader Douglas Ross said. “We won’t play Nicola Sturgeon’s games. We won’t take part in a pretend poll when there is real work to be done."

Like Wales and Northern Ireland, Scotland has its own parliament and devolved government and makes its own policies on public health, education and other matters. But the U.K.-wide government in London controls matters such as defense and fiscal policy.