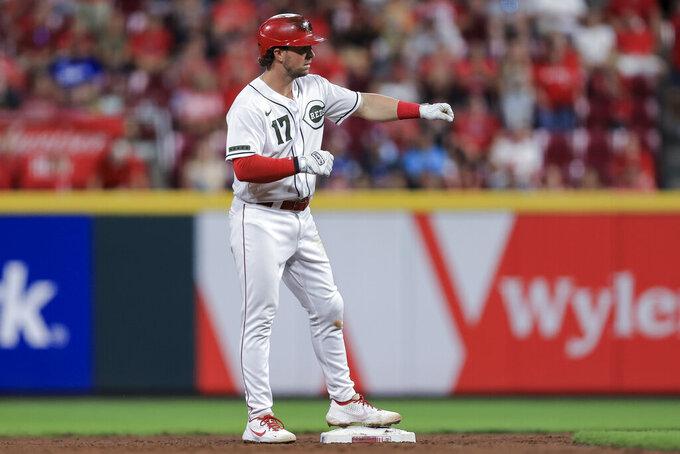 CINCINNATI (AP) — Despite a slow start and a rash of injuries, the Cincinnati Reds stayed within striking range of the playoffs for most of the summer. But it couldn't last.

While the St. Louis Cardinals surged, the Reds lost eight consecutive series from Aug. 24 to Sept. 19, going 8-16 in that stretch, and were elbowed out of the wildcard derby. They finished 83-79 in the NL Central, behind the Brewers and Cardinals, who claimed the second wildcard.

“It didn’t end like we wanted to," general manager Nick Krall said. "It’s definitely disappointing. There are some moral victories out of this, but at the same time it’s not what we want to do."

There were developments that bode well for the near future:

First-baseman Joey Votto, who turned 38 in September, had one of the best seasons of his career. He was one three Reds to hit 30-plus home runs, which hasn't happened since 2007.

Rookie second baseman Jonathan India — relegated to the team's alternate site all last season — hit .269 with 21 homers and as a leadoff man drew comparisons to Pete Rose. His .376 on-base percentage was among the top 10 in the National League.

Kyle Farmer, pushed out of the infield mix initially, became a reliable starting shortstop and hit a career-high 16 home runs.

Another rookie, Tyler Stephenson, teamed with Tucker Barnhart to give Cincinnati one of the best catching tandems in the majors.

“To get through a major league season and have the amount of success that individual players on our team had, to put ourselves in the position that we did, every single guy on our team should be very proud of that,” manager David Bell said. “We have a lot to to look forward to, a lot to build on.”

A T-shirt that became popular in Cincinnati during the summer proclaimed: “Joey Votto Still Bangs”

Votto made adjustments last season to hit for more power, and it certainly worked. His 36 homers — including a three-run shot in the season finale Sunday — tied for the second-highest total of his career. When he slammed 37 in 2010, he was on his way to becoming NL MVP.

He finished the 2021 season in the top 10 in the majors in homers, RBIs, on-base percentage, slugging percentage and OPS.

Votto's improbable resurgence came after he missed most of spring training with COVID-19 and then missed a month with a broken thumb.

“We have to get better, and that's the only way we're going to get to that 90-win threshold and get a playoff berth," Votto said. "A lot of people bring up how the Cardinals won 17 straight. It's hard to make it to the playoffs if you win 83, 84 or 85 games.”

Right fielder Nick Castellanos and the Reds have big decisions to make. He has two years and $34 million left on his contract but also can opt out and test the market. After having a career year — hitting .309 with 34 homers and 100 RBIs, and starting the All-Star Game — the 29-year-old Castellanos has a likely market value of over $20 million.

The Reds have a $10 million option on left-hander Wade Miley and a $7.5 million option on Barnhart, who may be expendable because of the emergence of Stephenson. Wiley (12-7, 3.37 ERA) threw a no-hitter against Cleveland May 7. Relievers Michael Lorenzen and Mychal Givens are free agents.

One of the greatest disappointments for the Reds was third baseman Eugenio Suarez. The 30-year-old hit 31 homers but his batting average hit a career-low .198 and his 171 strikeouts were the most on the team. Shogo Akiyama, a Japanese league signee who made $7 million this year, hasn't shown he can consistently hit major league pitching. He hit .204 as a utility player.