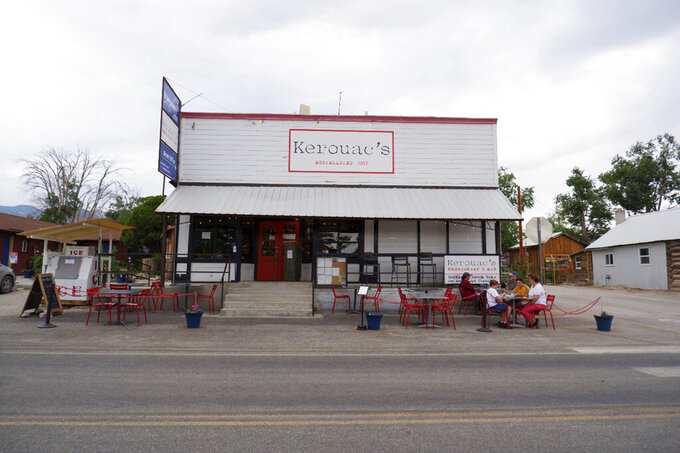 Ed Komenda, ASSOCIATED PRESS
This Wednesday, June 23, 2021 photo shows Kerouac's bar and restaurant in rural Baker, Nev. along the Utah line. The eatery is owned by a couple that gave up urban life in New York City back in 2017 to move to the remote area near Great Basin National Park. (Ed Komenda/The Reno Gazette-Journal via AP)

BAKER, Nev. (AP) — On a remote stretch of highway near the Nevada-Utah border sits a restaurant that may seem out of place in a town like this.

Kerouac’s is the business of Jake Cerese and Kate Claeys, a couple that gave up urban life in New York City back in 2017 to open a small-plates joint with the most impressive bar selection of spirits between Salt Lake City and Las Vegas.

It was a big change swapping a city of 8.4 million for a town of 60. When people hear where the owners came from, they always ask the same question.

How can you move from New York where there are museums and shows and culture to a place like Baker — a place that has no culture?

“But I wouldn’t say there’s no culture here,” Claeys said. “The people who come here come from all over the world, and our dinner room is like a microcosm. We get a lot of culture from our guests.”

Behind the bar, more than 200 bottles of spirits from all over the world line the shelves like soldiers in formation. Look a little closer, and you’ll find a book: Jack Kerouac’s influential 1957 novel, “On The Road.”

The story, narrated by Sal Paradise, tells of all the friends he met on the road. The tales inside are based on Kerouac’s own travels across America.

Long before they moved to Baker, Cerese and Claeys collectively traveled to more than 60 countries. The spirit of the road is what they wanted to bring to Kerouac’s and a 10-room roadside motel next door called Stargazer Inn.

“We offer a dining experience that is both sophisticated and approachable,” their website beckons. “We aim to be a meeting place in town, a space where locals and travelers can sit down to enjoy a satisfying meal in a convivial atmosphere.”

It’s an energy and vibe they go to great lengths to curate. All the way down to the employees they hire to work the five or six months out of the year the restaurant is open.

Taking out ads on websites like Cool Works that cater to seasonal workers looking for gigs in remote and national park areas, Cerese and Claeys put applicants through a rigorous interview process to make sure they would be a good fit.

What are they looking for?

“We like people who are already into seasonal work and enjoy remote places and enjoy traveling,” Cerese said. “We want people that deeply care about the guest experience are into learning and bringing something to the table about food and drink.”

This year, there was a shift. Workers started seeking out Kerouac’s.

“Seasonal workers tend to get around,” Claeys said. “They travel when they’re not working, and they also talk to each other about ’where have you worked, where was a good place to work.”

Three of the five employees on staff this season had previously visited, enjoyed the place and wrote to say they were interested in working at Kerouac’s.

Mallory Zeller found Kerouac’s on a road trip from West Yellowstone in Montana to her native Kentucky.

The 25-year-old mixologist had been looking to move to a place as remote as Baker, so when she found an ad for a job at Kerouac’s, she applied and got it.

Cerese and Claeys arranged for her to move into a house across the street with other employees who also came from elsewhere.

Zeller brought with her not only experience on the road but serious drink chops. Back in Kentucky, she worked at a bourbon bar.

“Mixology is all I’ve done,” she said. “When I’m not working, I’m traveling.”

So what’s on the menu?

Kerouac’s specializes in small plates — or tapas. These are plates meant to be shared, but that are perfect for a solo diner who wants to try different dishes.

Behind the bar, Kerouac’s has the spirits to mix a large selection of drinks. Signature cocktails include:

Diners can also find non-alcoholic cocktails, Nevada beer — and one of the best wine lists in the state.