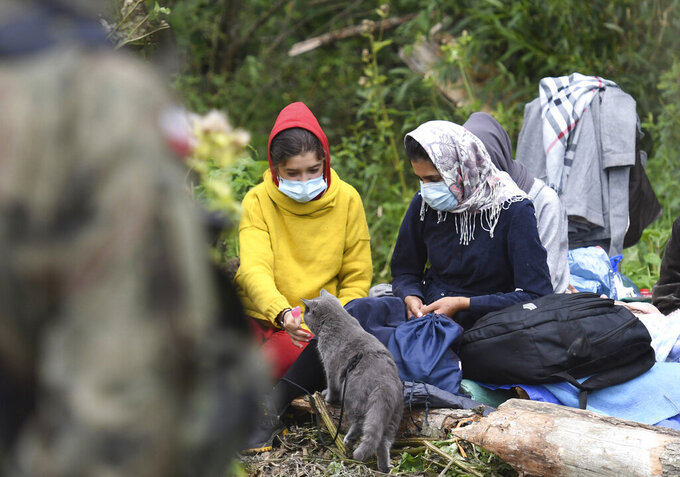 Michal Kosc, ASSOCIATED PRESS
Migrants wait in an area between the borders of Belarus and Poland near the village of Usnarz Gorny, Poland, on Friday Aug. 20, 2021. A refugee rights group in Poland said Friday that 32 people who fled Afghanistan have been trapped for 12 days in an area between the Polish and Belarusian borders, caught up in a standoff between the two countries. (AP Photo/Michal Kosc)

WARSAW, Poland (AP) — A Polish refugee rights group said Friday that 32 people who fled Afghanistan before the Taliban takeover have been trapped for 12 days in an area between Poland and Belarus, caught in a standoff between the two neighbors.

The group, Fundacja Ocalenie, called on Polish authorities to allow the people to apply for refugee status in Poland, saying they have the right to do so. Polish authorities are refusing to let them in, and Belarusian border guards will not let them return.

“In accordance with the law ... each of these people should be allowed to submit an application for protection,” Piotr Bystrianin, the president of the group's management board, said in a statement.

Poland and the Baltic states of Lithuania, Latvia and Estonia accuse Belarusian President Alexander Lukashenko of sending migrants across their borders with his country in what they have called an act of “hybrid war.” Their borders also form part of the European Union's external border, and the countries believe Lukashenko is acting in revenge for sanctions the EU imposed over his disputed reelection and crackdown on dissent.

A deputy foreign minister in Poland, Pawel Jablonski, said the group is still on the Belarus side of the border strip, where “they have been brought by the organizers of this procedure in Belarus.” He added that Belarus has “full responsibility for this situation.” which, he said, is aimed at “destabilizing the situation inside the European Union.”

“It is the responsibility of the Polish government to protect the national border, which is also the EU border,” Jablonski said.

Most of the recent migrants traveling from Belarus are believed to be originally from Iraq and Afghanistan.

Poland has deployed hundreds of soldiers to the border and is reinforcing it with barbed wire. Polish Prime Minister Mateusz Morawiecki said Thursday that he sympathized with the migrants, but said they were “a tool in the hands of Mr. Lukashenko” and Poland would not succumb to “this type of blackmail."

Fundacja Ocalenie said it arrived where the migrants were stuck, near the village of Usnarz Górny, on Wednesday to bring them food, tents, sleeping bags and power banks. They were not given access at first but were successful on Thursday.

Foundation member Tahmina Rajabova reported speaking to the migrants and learning that they are 32 people from Afghanistan who all want to apply for refugee status in Poland. They included a 15-year-old girl and some people in poor health.

A few days earlier, about a dozen people from Iraq — women and small children — were stranded with them, but Belarusian authorities allowed them back into Belarus, Rajabova said.

“It is an inhumane and scandalous situation that Poland, together with Belarus, condemns these people to imprisonment on the border, in conditions that offend human dignity and are life-threatening,” said Maciej Konieczny, a left-wing Polish lawmaker who joined the humanitarian workers at the border.

Lawyers with the foundation plan to submit applications for protection on behalf of the migrants, the group said.