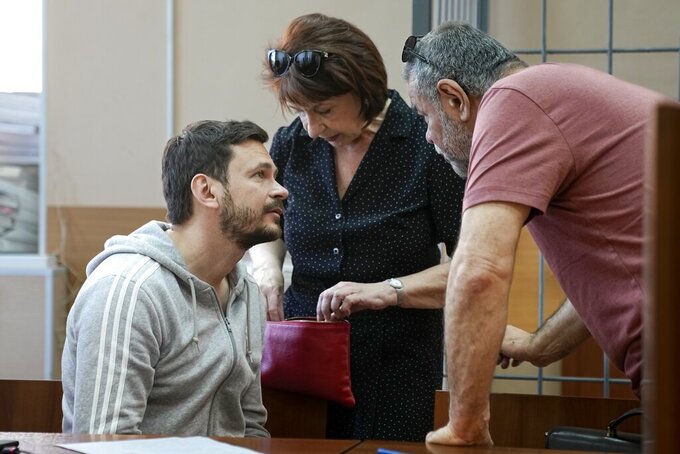 Alexander Zemlianichenko, ASSOCIATED PRESS
Ilya Yashin, Russian opposition activist and a municipal deputy of the Krasnoselsky district of Moscow, speaks to his parents prior to a court session in Moscow, Russia, Tuesday, June 28, 2022. On Tuesday, Yashin was sentenced to 15 days in jail on charges of failing to obey police. He was detained late Monday while walking in a park and police said he had grabbed one by the uniform and vulgarly insulted them. (AP Photo/Alexander Zemlianichenko)

MOSCOW (AP) — A court in Moscow on Wednesday rejected a prominent Russian opposition figure's appeal of the 15-day jail sentence he received on charges of failing to obey police.

The decision by the Moscow City Court, the capital's highest municipal judicial body, came one day after Ilya Yashin was sentenced.

Yashin, who has publicly criticized Russia's military campaign in Ukraine, was detained late Monday in a Moscow park. Police said he grabbed an officer by his uniform and insulted police, which Yashin denied.

Russia has cracked down on critics of its “special military operation” in Ukraine, A well-known dissident, Vladimir Kara-Murza, was arrested in April and remains jailed while awaiting trial on charges of spreading false information about the military. The offense carries a potential sentence of up to 15 years.

Also Wednesday, a Moscow court ordered the attorney for a jailed former journalist held for two months. Dmitry Talantov, who was arrested this week, also was accused of spreading false information on social media about the Russian military’s actions in Ukraine.

Talantov has defended Ivan Safronov, who has been jailed since July 2020 on charges of passing military secrets to Czech intelligence. Safronov insists on his innocence.

He wrote about military and security issues for major Russian newspapers before becoming an adviser to the head of the Russian space agency.