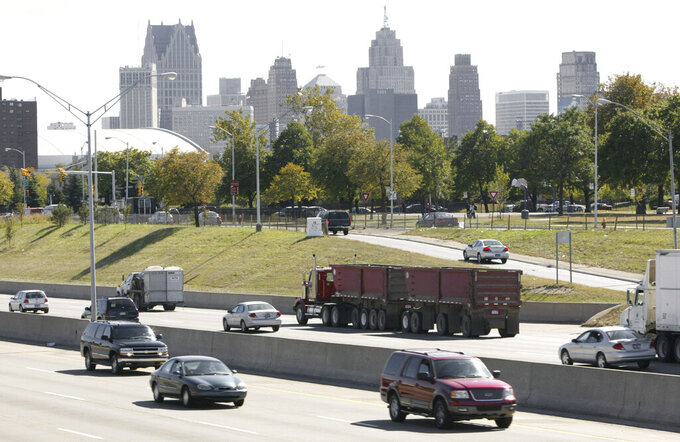 PAUL SANCYA, ASSOCIATED PRESS
FILE- Traffic flows on I-375 near downtown Detroit, Thursday, Sept. 30, 2004. Michigan Gov. Gretchen Whitmer is seeking funding from a new federal program, Wednesday, Nov. 24, 2021, to reconnect neighborhoods, often Black ones, that were razed a half-century ago to make room for highway. Many Detroit residents still mourn the loss of Black Bottom and Paradise Valley, vibrant black business and entertainment districts that were leveled to make room for Interstates 375 and 75 and other projects in the 1950s. (AP Photo/Paul Sancya)

LANSING, Mich. (AP) — Gov. Gretchen Whitmer on Wednesday asked the Biden administration for federal funding to replace Interstate 375, a 1-mile depressed freeway in Detroit that was built by demolishing Black neighborhoods 60 years ago.

The state wants to convert the highway, which connects I-75 directly to Jefferson Avenue, to a six-lane boulevard at street level.

The $1 trillion U.S. infrastructure law enacted last week includes $1 billion to reconnect communities that were divided to make room for freeways. Black Bottom and Paradise Valley, two predominantly African American neighborhoods, were razed in the late 1950s and early 1960s to build I-375, which created a barrier between the downtown and neighborhoods to the east.

Whitmer, in a letter inviting Transportation Secretary Pete Buttigieg to join her to tour the area, called the I-375 improvement project a “perfect candidate” for the new federal Reconnecting Communities program. She did not specify how much funding is needed.

Construction is not planned to start until 2027, after redesign work is complete.

The governor said I-375 — which opened in 1964 — the interchange with I-75 and various bridges are outdated and in need of modernization.

“Now, nearly three generations later, we have an opportunity to eliminate this obstacle and provide easier access to better jobs, services, and quality of life to the residents of adjacent areas of persistent poverty,” she wrote.

The infrastructure deal includes an extra $500 million a year for Michigan roads, bridges and public transit. The state and municipalities also can apply for a portion of multibillion-dollar competitive grant programs.

During Gov. Rick Snyder's administration, the State Transportation Commission approved five-year plans that included the reconstruction of I-375 starting in 2022. But after Whitmer took office, the panel removed the project from new five-year programs created by the Michigan Department of Transportation, following the authorization of $3.5 billion in borrowing to rebuild state highways and bridges.

MDOT spokesman Jeff Cranson said the agency “will continue to look for additional funds in the hope of expediting the project.” Design work will begin this winter.

“The design will be advanced over the next year so that we are in good position to take advantage of additional funds,” he said. “That includes exploring how the infrastructure bill can advance the construction schedule. MDOT will continue to explore all options.”