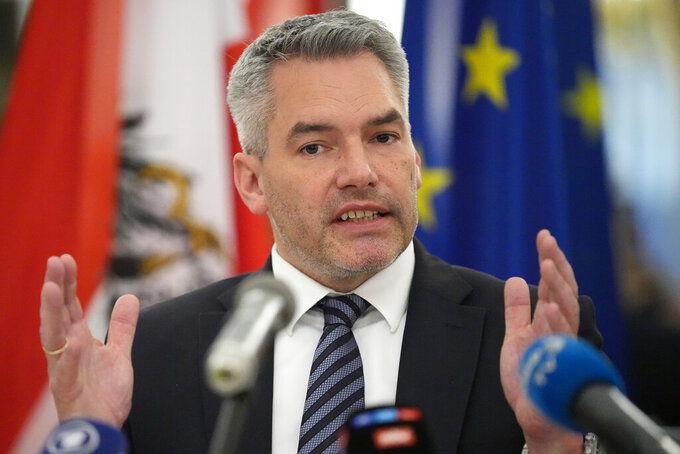 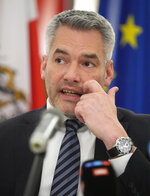 Nehammer was the first European leader to meet Putin in Moscow since Russia launched its invasion of Ukraine Feb. 24.

In a statement released after the meeting, the Austrian chancellor said his primary message to Putin in the “very direct, open and tough" talks was that “this war needs to end, because in war both sides can only lose.”

Nehammer told Putin all those responsible for war crimes in the Ukrainian city of Bucha and elsewhere would be “held to account."

He also stressed the need to open humanitarian corridors so that civilians trapped in cities under attack can access basic supplies like food and water, according to his statement.

The Austrian leader called the Moscow trip to Moscow his “duty” to exhaust every possibility for ending the violence in Ukraine, coming just two days after travelling to Kyiv for talks with Ukrainian President Volodymyr Zelenskyy.

Speaking at a news conference in Moscow, Nehammer said face-to-face talks to look “each other in the eye, discussing the horrors of war,” could have a greater impact over the long term.

But he said he walked away from the meeting without much optimism for an end to the war any time soon.

European Union-member Austria supported the 27-nation bloc’s sanctions against Russia, though it so far has opposed cutting off deliveries of Russian gas. The country is militarily neutral and is not a member of NATO.

But Nehammer and other Austrian officials have been keen to stress that military neutrality does not mean moral neutrality.

“We are militarily neutral, but have a clear position on the Russian war of aggression against Ukraine,” Nehammer wrote on Twitter Sunday when announcing his trip to Moscow. “It must stop!”

Nehammer said he told Putin the EU is “as united as it’s ever been” on the issue of sanctions, and that these will remain in place - and may even be strengthened - as long as Ukrainians continue to die.

Earlier Monday, Austrian foreign minister Alexander Schallenberg said Nehammer decided to make the Moscow trip after meeting with Zelenskyy in Kyiv and following contacts with the leaders of Turkey, Germany and the European Union.

Schallenberg said ahead of a meeting with his EU counterparts in Luxembourg that it was an effort to "seize every chance to end the humanitarian hell" in Ukraine.

He added that “every voice that makes clear to President Putin what reality looks like outside the walls of Kremlin is not a wasted voice.”