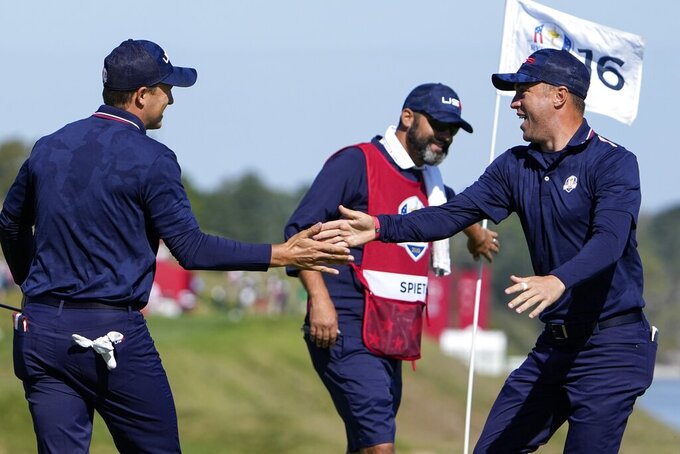 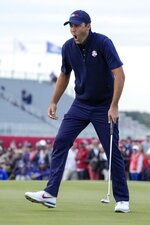 SHEBOYGAN, Wis. (AP) — The final team session that left the Americans on the cusp of winning back the Ryder Cup ended in a tie that was open to interpretation.

Scottie Scheffler made the biggest putt of his young career, helping the Americans flip a fourballs match late Saturday afternoon and giving them an 11-5 lead.

Not only is it their largest lead in the modern era dating to 1979, no team has ever won the Ryder Cup when trailing by more than four points going into the final session of singles.

“No one is taking tomorrow for granted at all,” U.S. captain Steve Stricker said. “We are totally focused on what we need to do to get the job done.”

For the Europeans, simply not losing a session for the first time all week at least showed them they have some fight. That won't make the task any easier.

“We are not going to give up,” Sergio Garcia said. “I will give my all to them, and I know they will do the same thing for me. We are going to try out hardest. We know it's going to be difficult. But we're going to do our best.”

The pressure and drama so typical of a Ryder Cup on Saturday was evident. The only real suspense, however, was whether Europe could make a game of it.

Instead, the Americans held their own over the final hour. Dustin Johnson completed a perfect week of team playing by winning his fourth match, three of them with Collin Morikawa at his side, and the six U.S. rookies did their part by going a combined 9-1-2.

Two of them are Xander Schauffele and Patrick Cantlay, who rolled over Lee Westwood and Matt Fitzpatrick with a five-hole stretch of clutch play and big shots around the turn. Cantlay was walking over a bridge to the 10th tee when he said, “It's time to put our metal spikes down on their (expletive) necks."

Another is Scheffler, who teamed with Bryson DeChambeau in the last match on the course. The match was all square until Scheffler holed a 15-foot birdie putt on the 15th hole, leading to a fierce chest bump with the bulked up DeChambeau. Scheffler held his own with that, too.

“We didn’t want them to be able to win a session,” Scheffler said. “So for us to get a full point here was huge, and the last match out on Saturday is always a big match, so for us to keep the momentum on our side was definitely big for the team.”

The Europeans tried to hold their own, getting another big win from Jon Rahm and a clutch moment from Shane Lowry, who holed a 10-foot par putt on the 18th green and was pumping his arms so furiously in celebration that he finally dropped his putter on the ground.

So much was as stake. So little was gained.

“We’re not in a good position and it’s going to take a beyond monumental effort,” said Ian Poulter, who has failed to deliver a point in two matches. “So we need a couple of miracles.”

The reference was to the “Miracle at Medinah” in 2012, when Europe stormed back from a 10-6 deficit in shocking fashion. Stricker played on that team and said the Americans have learned from their mistakes.

“I'm not going to bring up Medinah,” Stricker said. His message to them was, “Don't be content with where we're at. We want to win the session again tomorrow.”

“They have run the score up on us before. And if we have the opportunity, we are going to run it up on them tomorrow,” he said. “We have guys that are hungry to win a point.”

The 11-5 lead matches the Ryder Cup record in the modern era that dates to 1979. Europe led by six points in 2004 at Oakland Hills and went on to a nine-point victory. It's the largest lead since the Americans led by nine in 1975, before Europe was invited to the matches.

The Americans routed Europe again in foursomes Saturday morning — a 3-1 advantage for the third straight session — to build a 9-3 lead.

And while Europe was ahead in three of the afternoon fourballs, it turned out to be a draw.

Next up is the final session of 12 singles matches, historically an American strength. They need to reach 14 1/2 points to win back that gold trophy.

“I think we have a lot of guys on this team that really hate losing, and so individual matches tomorrow, I think guys are going to be fired up and ready to play,” Scheffler said. “Hopefully, finish this thing off.”

Schauffele leads off against Rory McIlroy, who has lost all three of his matches and has yet to play the 16th hole since the practice rounds. He's followed by Cantlay against Lowry.

Rahm was unbeaten in team play, one of the few bright spots for Europe. The world's No. 1 player, looking every bit the part, teamed with Garcia to win foursomes in the morning and then held on to beat Brooks Koepka and cold-putting Jordan Spieth in fourballs.

Right when it looked as though the Americans might square the match, Rahm made a 30-foot birdie on the 16th hole and Spieth missed from 12 feet — the sixth time in fourballs he missed from that range or closer, including one that mysteriously circled the entire cup and came out.

Even so, the climb is steeper than some of the wild dunes dotting the landscape of this rugged terrain along the Lake Michigan shores.

“I'm sure they know they have a tall order ahead of them,” European captain Padraig Harrington said. “But it's still possible.”

Europe needs to win nine of the 12 matches to retain the cup. Harrington noted that was only a half-point more than it won on the final day at Medinah.

“They have to just go out there and win their own individual match. There’s nothing more they can do than that,” he said.

The top five players in the world have gone 15-0-2 in team play at this Ryder Cup. The problem for Europe is four of those players are Americans.

Johnson, the first American since Larry Nelson in 1979 to go 4-0 in team play, was the only American to play all four matches.

“The lead that we have created is huge,” DeChambeau said. “We haven't had this good of an opportunity in a long time and hopefully we can get the job done tomorrow. We’ve got to focus like it’s 0-0 again and try to get every point we can.”