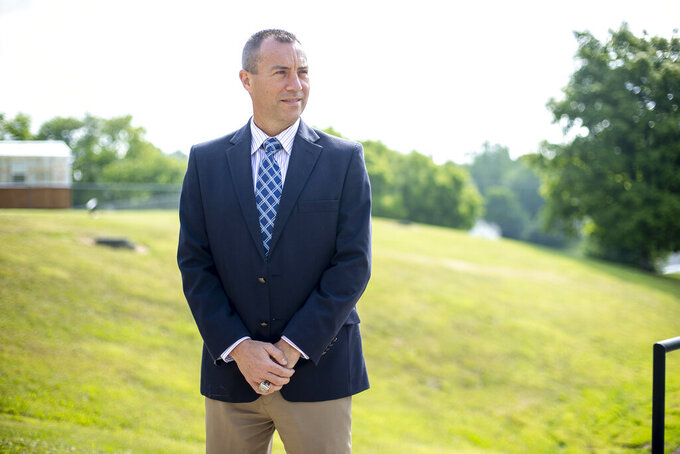 Ryan C. Hermens, ASSOCIATED PRESS
Jason Booher, the new Mercer County Schools superintendent, poses for a portrait outside the school district's central office in Harrodsburg, Ky., on Friday, July 2, 2021. Booher worked his first day as a Kentucky school superintendent July 1, his career as an educator, he said, motivated by his teachers after he survived the fiery 1988 Carrollton church bus crash at the age of 13. (Ryan C. Hermens/Lexington Herald-Leader via AP)

HARRODSBURG, Ky. (AP) — Jason Booher worked his first day as a Kentucky school superintendent July 1, his career as an educator, he said, motivated by his teachers after he survived the fiery 1988 Carrollton church bus crash at the age of 13.

A drunk pickup truck driver heading the wrong way hit the bus, filled with Hardin County youth church group members returning from Kings Island amusement park outside Cincinnati. Twenty-seven people died in what was described at the time as the deadliest drunken driving incident in both Kentucky and the United States.

“He has used that moment to basically change the course of his life,” said Randy Phillips, chairman of the Mercer County Schools board that hired Booher after the district superintendent announced his retirement. “He has used that to reach out to other kids throughout the state over the last several years.”

Phillips said Booher, now 47, was hired based on his accomplishments in education, most recently as principal at Pikeville High School. The school was rated one of the top in the state under his direction.

“Jason is a man of integrity. That’s a big factor for us. He loves education. He has dedicated his life to it,” Phillips said.

Booher was raised in Radcliff. When he was just weeks away from his 14th birthday, his best friend Chad Witt invited him on the church trip to Kings Island. It was a three hour drive from Radcliff that on May 14, 1988 took the children and adults to Interstate 71, where the crash happened.

“It was a beautiful day — sunny. There were 67 of us, four chaperones, 63 kids, including my best friend,” Booher said. ”We had a great day at King’s Island, not knowing it was going to turn into the most tragic thing you could ever go through.”

“I saw an opening near the top of the emergency door. I dove out the top of that and landed on the asphalt on I-71,” he said.

“My best friend who was sitting with me didn’t make it out, only 40 of us survived it,” Booher said.

Booher was not injured but many other survivors were injured or burned and spent years recovering.

“I was really lucky that I didn’t get burned,” he said, noting in 90 seconds the temperature in the bus soared to over 1,500 degrees.

Booher said he was already at a “fragile” age. To go through “such a tragic thing to bury your best friend and 26 others, really, really just rocked my world,” he said.

Educators at Radcliff Middle School and coaches and teachers at North Hardin High School where he started that next fall, “motivated me, they pushed me , they drove me, they challenged me, and they made sure I wasn’t one of those statistics that fell through the cracks,” said Booher. That gave him resolve.

“I wasn’t going to let Larry Mahoney and his decision to drink and drive take away my goals and my dreams of one day being successful as far as being the first person in my family to graduate from college,” he said. The Louisville Courier-Journal has reported that Mahoney served 10 years of a 16-year prison sentence after being convicted of 27 counts of manslaughter.

When Booher enrolled at the University of Kentucky in Lexington, he decided that if educators, teachers and coaches had such a big impact on him in the four years after the bus crash, he wanted to do the same for young people. He wanted to become a career educator and a coach.

Booher has been certified as a superintendent for 15 years, but said he had to get coaching out of his blood first.

In eastern and northern Kentucky, he had various roles as a math teacher, an assistant principal, an athletic director and coach before becoming the principal at Pikeville High School. He has been married to Hilary Booher for 25 years and has two children, Harrison, a sophomore at Georgetown College and Jewel, who will be entering Eastern Kentucky University at Richmond in the fall.

The bus wreck brought change to Kentucky. There were stiffer drunken driving laws, improved bus safety and survivors who continue to talk about the dangers of drinking and driving, Booher said.

Booher draws on the tragedy in speeches, telling students that he has as much fun in life as anybody, but has not drank alcohol or experimented with drugs. He talks to kids about overcoming adversity and to school staffs about helping at-risk kids.

In Mercer County, Booher will be working with retiring superintendent Dennis Davis for the next month in a transition phase until Booher solely assumes the post on Aug. 1. He will oversee a district of 6,000 students with a budget of $25 million.

“The good Lord has always taken care of me... since the bus crash. He’s provided opportunities for me, numerous, that I don’t deserve. Mercer County is obviously the next place he wants me to be,” Booher said.