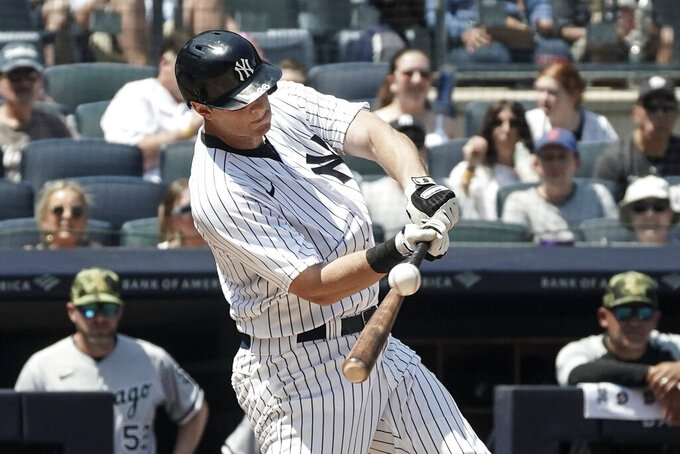 LeMahieu was set to lead off and play third base against the Orioles, but New York announced he wouldn’t play about 90 minutes before the first pitch. Manager Aaron Boone said LeMahieu had an MRI on Tuesday that came back clean. The three-time Gold Glove winner got a cortisone shot but is expected back within a day or two.

The Yankees are still waiting to learn more on Stanton. He'll get an MRI on Wednesday after being replaced by a pinch-hitter in the seventh inning. He was 0 for 2 with a strikeout as the designated hitter before exiting.

LeMahieu, a two-time batting champion, is hitting .250 with three homers and a .704 OPS this season. He's 5 for 39 (.128) over his past 10 games. Boone said LeMahieu first had discomfort while pinch-hitting Monday, then felt it again during batting practice Tuesday.

“Really good news,” Boone said of the diagnosis. “We're pretty optimistic that hopefully he's back, if not tomorrow, the next day probably.”

Marwin Gonzalez replaced LeMahieu at third base, and Aaron Hicks was bumped up to the leadoff spot. Gonzalez was hit in the right hand by a pitch Tuesday but remained in the game.

Left fielder Joey Gallo and third baseman Josh Donaldson remain on the COVID-19 list, although Gallo has tested negative and worked out at Yankee Stadium on Tuesday. He could be activated Wednesday.

Chapman had an MRI on Monday that came back negative for a tear. Boone said Tuesday that Chapman was improving but not game ready.

Donaldson was sidelined by the virus Monday, shortly before being suspended one game by Major League Baseball for taunting Chicago White Sox shortstop Tim Anderson with multiple references to Jackie Robinson over the weekend.