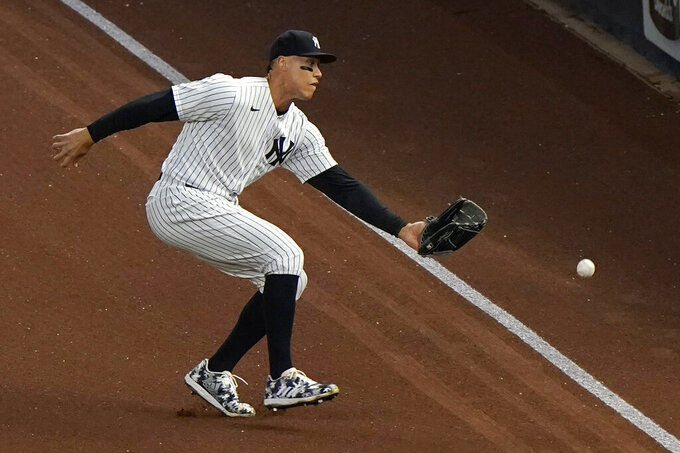 NEW YORK (AP) — Yankees slugger Aaron Judge was held out of New York's lineup Wednesday night with soreness in his left side.

Judge had a homer, three hits and four RBIs in a 7-2 win over Baltimore on Tuesday night but didn't play in the Yankees' 4-3, 11-inning loss a day later. New York has a day off Thursday, giving the right fielder a chance to rest on consecutive days.

Yankees manager Aaron Boone said he thought the soreness was from “general wear and tear” over the first few days of the season. He believes the discomfort might stem from when Judge took more swings than normal while serving as designated hitter on Sunday.

Boone said after Wednesday's game that Judge wasn't available and he wasn't certain Judge would be good to go by Friday's series opener at Tampa Bay.

Judge, the 2017 AL Rookie of the Year, missed 142 games spanning 2018-20, going on the injured list at different points for a right wrist fracture, a left oblique strain and twice for right calf strains. He also broke a rib last March but was ready for opening day after the pandemic delayed the start of the season.

Boone said Judge's current soreness didn't seem specific to the left oblique, instead calling it “general soreness" on that side.

The 28-year-old Judge revamped his workout routine in the offseason with an eye on staying healthy. With guidance from second-year Yankees director of player health and performance Eric Cressey, Judge and teammate Giancarlo Stanton swapped dumbbells for downward dog, prioritizing yoga and stretching over weight lifting.

Judge joined the team for pregame stretching but didn't appear to take batting practice. He also said the right fielder wasn’t expected to seek an MRI or other image testing, but he wouldn’t rule it out as a possibility.

NOTES: 2B Rougned Odor wasn't in uniform Wednesday, a day after being acquired from the Texas Rangers. ... LHP Justin Wilson (shoulder soreness) is expected to be activated when he's eligible on Friday. Until then, New York will carry only 25 players.