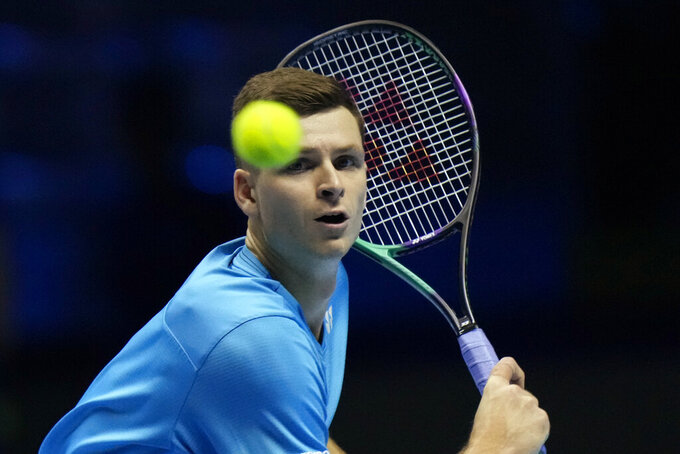 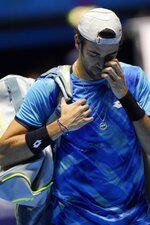 Zverev won the first set 7-6 (7) and was leading 1-0 in the second when Berrettini dropped his racket to the ground, covered his face and bent over in apparent pain.

“The atmosphere was one of the best I felt ever in my life and that’s why it feels so bad right now,” Berrettini said. "The worst thing that could have happened happened.”

The result moved Zverev ahead of Medvedev atop the Red Group in the round-robin format.

Medvedev, the defending champion at the year-end tournament for the top eight players, served 15 aces and didn’t face a single break point against the seventh-seeded Hurkacz, who beat him in five sets at Wimbledon this year.

Medvedev attributed his strong serving performance to conditions he called the fastest he’s ever experienced on tour.

“I don’t think it’s the surface itself because (the) surface probably is exactly the same as in London,” the Russian said, referring to the previous tournament host. "I think it’s a combination of air, which is really dry here, and I think the ball goes very fast through the air, the balls itself, which are quite fast balls, and the court.

“I was barely under pressure on my serve against a great returner,” Medvedev added. “And same for me, I had just two games where I had break points."

It's the first edition of the event in Turin — after 12 years in London.

With both players serving well inside the Pala Alpitour, neither Medvedev nor Hurkacz produced a break point in the first set, when Hurkacz’s strong net play proved the difference in the tiebreaker.

Medvedev responded with an early break in the second set then broke again in the first game of the third as he methodically wore Hurkacz down.

“Daniil is an amazing player and he plays great tennis for the whole match,” Hurkacz said. “He doesn’t have dips in his game, so that makes him such a tough opponent.”

Berrettini, this year’s Wimbledon finalist, was treated by a trainer during a medical timeout. Then he played one more point before calling it quits.

“I don’t know what it is,” said Berrettini, who was also slowed by injuries last year. “I really hope that it’s not that (serious) but it was impossible to keep playing.”

Jannik Sinner, another Italian, is the first alternate and could replace Berrettini for the next two group matches.

Berrettini is slated to play on Italy's team in the Davis Cup finals — also in Turin — the week after the ATP Finals.

“Tomorrow with my team and the doctors I’ll do some checks,” Berrettini said. "I really hope it’s not something that keeps me from playing.”