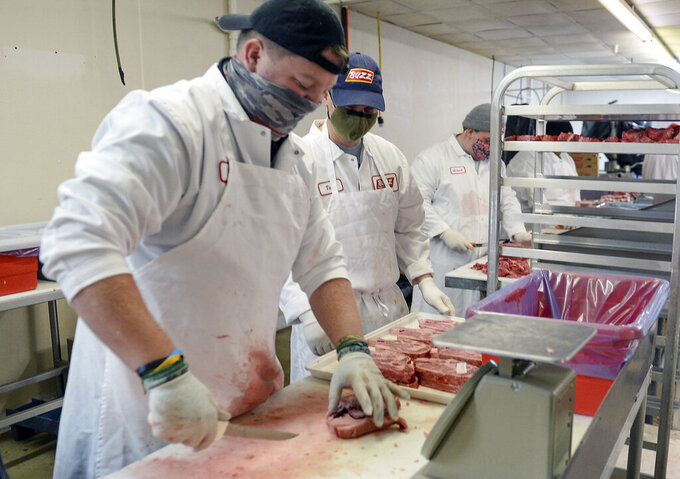 CHARLESTON, W.Va. (AP) — Dickinson and Angela Gould are training meat cutters in their apprentice program while eyeing the opening of a future abattoir, or slaughterhouse, early next year. It’s a busy time in the meat game.

The Goulds own Buzz Food Service, that rare West Virginia business whose products transcend perception. From its home just east of Charleston, on U.S. 60 between Malden and Belle, it produces the legendary Buzz Buttered Steak. Generations of Kanawha Valley residents might have thought those frozen beef patties were a national product, as ubiquitous as they were in their households.

While Buzz Buttered Steaks are basic and budget friendly, the Goulds have five burly fellows training to cut up more substantial, and expensive, cuts of beef.

“It has gone beautifully,” Angela Gould said earlier this week of an apprentice program that began Sept. 7. “It’s a team of people really engaged and excited by the work. It’s a skilled job. There are skilled jobs to be had all across this country.”

The apprentice program and the $6.5 million slaughterhouse are intertwined. The company will need about 40 new employees once the slaughterhouse doors open. Twenty-five will be butchers, with the chance to move into management.

The first class has been treated well. They are paid while they work, learning different cuts of beef and how to administer them. By the time their two-and-a-half-year apprenticeship is over, they will be making $20 an hour.

Beau Bellamy, 30, moved to the Charleston area years ago to work for the county ambulance authority. He chose butchering for the hands-on experience.

“When I was little my dad did a lot of mowing,” Bellamy said. “He said he loved to see his progress. That’s how I see this. It’s nice to work in a career when you can show someone what you’ve done. And now I’m on a team that cuts steak for the best place like this in West Virginia.”

J.J. Johnson is another member of the class.

“I’ve learned more about meat than I even thought I could. If you need help here, all you’ve got to do is ask and they’ll do it without any pause.”

When the men are done with their training, they will possess federal Labor Department journeyman meat-cutter licenses, valid across the U.S. No apprentice has to pay for anything, including books, said Angela Gould’s assistant, Sierra Jones.

Buzz Food, founded by Gould’s family in 1968 and in its current location since the mid-1980s, is a tailor-made setting for today’s state job market, Dickinson Gould said.

“A lot of people around here look at that and say, ‘Hey, I can do that kind of work,’” Dickinson Gould said. “It’s a trade. You wear boots. They’re handy with a knife, been cleaning their own deer for a while now. This can be something they’re comfortable with.

“It’s not like trying to get a coal miner interested in computer coding. Do you know many coal miners who want to code?”

Not only are the apprentices taught the trade in Charleston, the Goulds have arranged for a trip to the Certified Angus Beef brand headquarters near Cleveland, Ohio, for more instruction The training is going well, setting stage for the Goulds’ next production — the abattoir, which means slaughterhouse in French.

It comes from the French verb abattre, or “to slaughter.” Slaughterhouses are often called abattoirs throughout the South, the Goulds said.

Those pieces are cut to the specifications of local restaurant owners, mostly, though the Dickinsons believe opening the slaughterhouse will also crack a retail market.

“We’ve known that a void exists in the market for at least a decade,” Dickinson Gould said. He believes cattle from Greenbrier, Monroe, Mason and Jackson counties will supply plenty of stock for slaughter.

Dickinson Gould said perhaps a more rural spot might have been a better location for the abattoir because of the site of unloading cattle next to a four-lane highway, but hiring might be easier. Kanawha is the state’s most populous county.

He said his abattoir will be as humane as possible. Cows will be cushioned in hydraulic side pads, which soothes them, while another apparatus supports their heads. Then a steel rod penetrates their skulls.

Not everything has a happy ending.