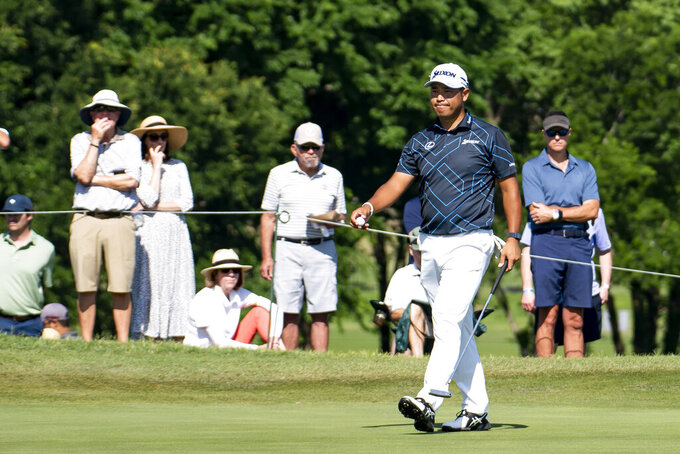 Emil Lippe, ASSOCIATED PRESS
Hideki Matsuyama, of Japan, reacts after putting on the 18th hole during the first round of the AT&T Byron Nelson golf tournament in McKinney, Texas, on Thursday, May 12, 2022. (AP Photo/Emil Lippe)

McKINNEY, Texas (AP) — Sebastian Munoz was standing in the middle of the fairway on the 18th hole thinking about his shot at a 59 in the first round of the Byron Nelson. After missing the green, he became the first player in PGA Tour history with two rounds of 60 in the same season.

Munoz made a nice flop shot from the right of the green, then holed the 12-foot birdie putt to wrap up his 12-under round that included an impressive surge after his only bogey.

“I mean, I wanted to give myself a chance. ... It was 250 (yards) to the pin into the wind. I kind of wanted to hit like a bullet, like a little draw,” Munoz said. “I knew if I want to hit it close, had to be a fade, soft-landed shot. I tried to do that. Overdid it and ended up with a 60, which is really good around here.”

Good for a four-stroke lead over defending champion K.H. Lee, Mito Pereira, Peter Malnati and Justin Lower. Kyle Wilshire, a Monday qualifier making only his third career PGA Tour start, was alone in sixth after a 65 that included a near hole-in-one when he banged the flagstick with his tee shot at the 230-yard, par-3 seventh.

Lee won the 2021 Nelson at 25-under par when his low round was a 65. He played in the same group Thursday with Scottie Scheffler and Justin Spieth, the major champions from Dallas whose first PGA Tour events were both as teenagers at the Nelson when it was still at TPC Four Seasons.

Scheffler, the No. 1 player in the world, and Spieth both shot 67. So did 11th-ranked Dustin Johnson, who started on the back nine with five birdies and then had four more, along with four bogeys.

It was the first individual start for Scheffler since winning the Masters five weeks ago. Three-time major champ Spieth, ranked No. 9, played for the first time since his RBC Heritage victory the week after the Masters.

Munoz was 2-under after a one-stroke penalty because of a wayward tee shot at the eighth hole. The 29-year-old Colombian, who also lives in the Dallas area, then went 6 under in the next four holes. He eagled the ninth and 12th holes and had 3-foot birdies on both holes in between those par 5s.

After just missing a long birdie chance on No. 13, he made four birdies over the last five holes — the longest of those putts being the last one after only his second missed green in the round.

“It’s a great feeling whenever everything is clicking, hitting the tee shots, ball is coming out in the window that you imagined, the putts, that you’re reading good the putts. The speed," Munoz said. “When everything is going, it’s just stay out of the way and just kind of let it happen.”

Munoz also had a 60 in the opening round of the RSM Classic at Seaside in Georgia in November, although that was a 10-under score. He went on to finish third. This is his seventh time as a first-round leader, but his only PGA Tour win came at the Sanderson Farms Championship two seasons ago when he was 43rd after an opening 70.

TPC Craig Ranch, the second-year home of the Nelson, is about 30 miles north of downtown Dallas and 30 miles east of the University of North Texas in Denton, where Munoz went to school.

Even though Munoz lives in North Texas, he said he hadn't played TPC Craig Ranch since the Nelson's debut there last year. Munoz finished 10 under for the four rounds combined last year, when he tied for 55th. He said he played the course a few times while in college.

Spieth started with seven consecutive pars before hitting his approach at the par-4 No. 8 inside four feet and made the birdie. He then missed the fairway of the tee at No. 9, but still got his second shot on the green and made a 12-foot putt for eagle.

Wilshire, who turned pro in 2014, earned $8,000 last weekend when he tied for second place during a mini-tour event in Oklahoma. The Nelson purse is $9.1 million, with the winner taking home more than $1.6 million and the runner-up almost $992,000.

After having knee surgery in 2018 and not playing well the following year, Wilshire took a job as a trash porter at his girlfriend’s apartment complex for four months during the pandemic shutdown in 2020. It was an evening job that allowed him to work on his game during the day.

“It wasn’t the most glamourous job, but I wouldn’t say it humbled me, but allowed me to work on my game,” Wilshire said. “It kept me in good shape and I just think it made me a little tougher. Made me just appreciate the opportunity to play.”