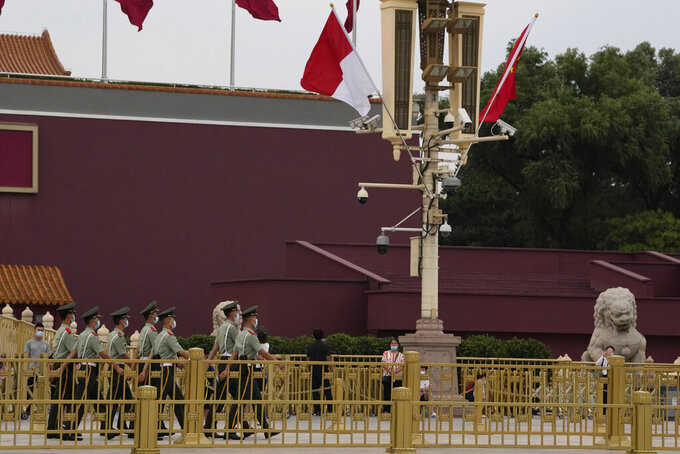 Ng Han Guan, ASSOCIATED PRESS
Chinese paramilitary policemen march near the Indonesian and Chinese national flags in front of Tiananmen Gate in Beijing, Monday, July 25, 2022. Indonesian President Joko Widodo was heading to Beijing on Monday for a rare visit by a foreign leader under China's strict COVID-19 protocols and ahead of what could be the first overseas trip by Chinese President Xi Jinping since the start of the pandemic more than two years ago. (AP Photo/Ng Han Guan)

BEIJING (AP) — Indonesian President Joko Widodo was heading to Beijing on Monday for a rare visit by a foreign leader under China's strict COVID-19 protocols and ahead of what could be the first overseas trip by Chinese President Xi Jinping since the start of the pandemic more than two years ago.

Xi, who has participated in international meetings only by video link during the pandemic, may end his COVID-19 isolation and attend a Group of 20 summit in Indonesia in mid-November, analysts both inside and outside China said.

“The restrictions during the pandemic years have shrunk China’s diplomatic activities,” said Zhu Feng, dean of the School of International Studies of Nanjing University. “China must face reality. Although the pandemic is still not over, it is a must for China to walk out and invite in.”

Widodo, the host of this year's G-20, will meet Xi and Premier Li Keqiang on Tuesday, the Indonesian Foreign Ministry said. He will then hold talks with Japanese Prime Minister Fumio Kishida in Tokyo on Wednesday and South Korean President Yoon Suk Yeol in Seoul on Thursday,

Japan, South Korea, China and Indonesia are all members of the G-20, a group of 19 major nations and the European Union.

Indonesian Foreign Minister Retno Marsudi, who is traveling with Widodo, said the trip would focus on trade, investment, health, infrastructure and fisheries. She called China, Japan and South Korea partners in economic and regional issues.

But Veronika Saraswati, an international politics researcher at the Centre for Strategic and International Studies, an Indonesian think tank, said she believes Widodo's trip is also to personally invite Xi to the G-20.

“Xi’s presence is certainly highly anticipated and will give significance to the success of the meeting,” she said, noting the deterioration of the global economy because of the pandemic and the Russia-Ukraine conflict, as well as tensions with China across the Indo-Pacific region.

His attendance is far from guaranteed. Yu Jie, a China expert at Chatham House in London, said it would depend on the successful completion of a major meeting of China's ruling Communist Party this fall at which Xi is expected to get a third five-year term as party leader.

Separately, China has told Thailand that Xi would attend a meeting in Bangkok of the Asia-Pacific Economic Cooperation forum shortly after the G-20, “if he is not preoccupied with other responsibilities,” said Tanee Sangrat, a spokesperson for the Thai Foreign Ministry. Many leaders combine a trip to APEC and the G-20.

China has not confirmed Xi's trip to APEC.

“I think Xi will go to G-20 having secured his third term in office and in a strong political position,” said Bonnie Glaser, the director of the Asia program at the German Marshall Fund of the United States.

Widodo is one of the few foreign leaders to visit China during the pandemic and the first since several attended the opening ceremony of the Winter Olympics in Beijing in February, including Russian President Vladimir Putin.

Russia is a member of the G-20, and its invasion of Ukraine complicates the annual meeting, potentially putting Putin in the same room with U.S. President Joe Biden and European leaders who have condemned the war.

Xi, who traveled widely before the pandemic, has not left China since returning from a visit to Myanmar on Jan. 18, 2020. Five days later, the city of Wuhan was locked down as China took on the virus that caused the disease later named COVID-19.

Xi made his first trip outside mainland China about three weeks ago, visiting the semi-autonomous city of Hong Kong to mark the 25th anniversary of the return of the former British colony to China.

World leaders also hold one-on-one meetings during the G-20, so it could provide an opportunity for Xi's first in-person meeting with Biden since he took office in January 2021.

“It is a rare opportunity to conduct face-to-face exchanges on a multilateral stage, which China needs very much,” said Su Hao, an international relations professor at China Foreign Affairs University.

He added that the G-20 would be an opportunity for Xi to advance proposals he has made on global development and security.

Widodo will be the second foreign leader after Biden to visit South Korea since Yoon's inauguration in May. They are expected to discuss boosting economic, security, infrastructure and defense industry cooperation.