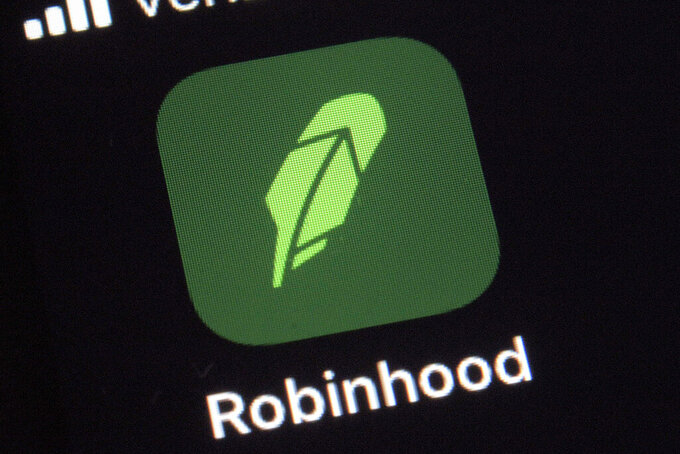 Patrick Sison, ASSOCIATED PRESS
FILE - This Dec. 17, 2020, photo shows the logo for the Robinhood app on a smartphone in New York. The CEO of cryptocurrency exchange FTX has bought a significant, 7.6% stake in Robinhood Markets, according to a filing with U.S. regulators on Thursday, May 12, 2022. (AP Photo/Patrick Sison, File)

NEW YORK (AP) — The CEO of cryptocurrency exchange FTX has bought a 7.6% stake in Robinhood Markets, according to a filing with U.S. regulators on Thursday.

Samuel Bankman-Fried said in the filing that he bought the shares thinking they were an attractive investment and that he doesn't currently have any plans to change or influence the control of Robinhood.

Robinhood shot to fame for its easy-to-use trading app, which brought a new generation of investors to the stock market, perhaps most famously with the meme-stock frenzy that sent GameStop soaring early last year. But crypto has become a major part of its business.

About a quarter of the revenue Robinhood made during the first three months of the year from trading by customers came from cryptocurrencies. Robinhood has been bolstering its crypto business, rolling out crypto wallets for its customers and adding new coins to trade on its platform.

Bankman-Fried built his stake in Robinhood through a company called Emergent Fidelity Technologies, buying shares steadily from March 14 through Wednesday. The stock's price fell over that time, as it has generally since briefly touching $85 shortly after its debut on the Nasdaq in the summer of 2021.

Robinhood's stock has plummeted as its growth has slowed sharply. It reported a larger loss for the first quarter of this year than analysts expected. The company said volatility in stock and crypto markets kept casual investors away, or at least made them more cautious and less likely to do large trades.

Robinhood's stock jumped nearly 27% in after-hours trading Thursday following the disclosure. It rose 5% earlier during the regular trading session to close at $8.56.